People fight about all sorts of things online. Most of you probably don’t spend a lot of time reading comments on YouTube, but you probably know they’re not particularly intellectually stimulating places. I’ve been interested in why this is the case, why there’s so much drama online, for the past ten years. My most recent book ‘Religious Talk Online’ looks at how Christians, Muslims, and atheists use Facebook and YouTube to get their message out and more often than not, also engage in ugly ways with people with whom they disagree while they’re at it. You can probably guess what sorts of things they argue about: evolution, unsurprisingly, is a big one for Christians and atheists. Muslims and Christians tend to fight about whether Jesus is God or not. The sorts of things that people have been fighting about for a while now.

In ‘Religious Talk Online’, I consider how caricatures people have of their perceived opponents can cause a lot of trouble when they actually have to engage with those opponents. My case in point from the book is the Facebook preacher Josh Feuerstein. He made two videos, one called ‘Dear Mr Atheist’ and one called ‘Dear Mr Muslim’, which were presented as open messages to two groups of people he acted like he knew, challenging what he thought to be their core beliefs. I’m not sure what he thought would happen, but both an atheist and a Muslim did respond, and again unsurprisingly, took issue with the way he represented what they believed.

What resulted was some good old fashioned, back-and-forth Internet drama, with people mocking each other and doubling down, and a whole slew of videos and comments about how wrong everyone else was. A couple of things were interesting to me, however, as an analyst.

First, the videos made it so Josh had to actually interact with real Muslims and atheists responding to him, rather than the caricatures he had in his mind. It’s much harder to say Muslims believe something when you have an actual Muslim saying that they don’t believe what you say they believe.

Second, in this case, it seemed like social media actually had a moderating effect on how people talked about their beliefs. Sure, users said nasty things and misrepresented other people’s views, but because the whole thing happened in a public space, and all the users were trying to convince a broad audience of their position, beyond some surface level antagonism, these arguments seemed to basically serve as vehicles for each person to get their point across. All the drama was less about trying to win the argument and shut the other person up, and more about just having a chance to say what it is they believed. And if you were a Christian or a Muslim or an atheist, someone attacking you wasn’t actually all that bad if you could  think about what they said and respond to them in a way that continued to push your message forward. The drama gave you a bigger platform.

Of course, online drama is not always that benign. People do get hurt by what’s said on social media. People like the Christchurch shooter can be motivated by online hate and create very real, very negative outcomes. At the same time, I don’t think all those negative comments on YouTube mean that people necessarily hate each other. In a some cases, the comment or the drama video or the angry tweet is just an opportunity for people to argue for what they believe. But to do that, they also have to think about the positions of others, even if they do it in a way that doesn’t appear to be the most intellectually engaged. For Christian and Muslim and atheist evangelists, that drama is an opportunity to get their word out to people who wouldn’t normally hear them. 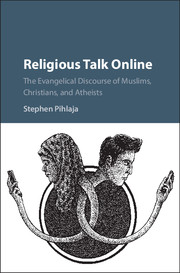 About the Author: Stephen Pihlaja

Stephen Pihlaja is Reader in Stylistics at Newman University Birmingham, where he also serves as Head of the Humanities Research Centre. His research focuses on the dynamics of discourse, or language in use, particularly as it relates to religious identity. He is the author of two books on interaction on social media: Antagonism on YouTube (Blooms...