The Pragmatics of Institutional Development: Legal Transplants in East Asia and Oceania

Despite the current trade war, this year the regional economy of Asia and Oceania is likely to contribute for over half of the global economic grow. With China leading the way, as one of the largest economies in the world, there are indications that legal systems in the regions are preparing for a new wave of legal reforms. Legal Transplants in East Asia and Oceania report on these legal reforms in two distinctive ways.

Despite the current trade war, this year the regional economy of Asia and Oceania is  likely to contribute for over half of the global economic grow. With China leading the way, as one of the largest economies in the world,   the region has experienced over two decades of economic development, making it a global manufacturing powerhouse. The unbridled development has proceeded, sometimes, without considering safeguards for investors, workers, the environment and individual rights. There are, however, indications that legal systems in the regions are preparing for a new wave of legal reforms. Legal Transplants in East Asia and Oceania report on these legal reforms in two distinctive ways.

Firstly, it describes on the latest phase of development in the institutional structures of the regions aimed at increasing trust among international traders, the judicial procedures aimed at the resolution of disputes, the management of environmental issues and the protection of human rights. Secondly, Legal Transplants in East Asia and Oceania delivers accounts of a cluster of epistemic methods that have been developed in different legal systems to implement overseas-inspired institutional reforms. In the late eighties, the transplant of capitalist principles such as labour and management meritocracy, and competition, in the Chinese Special Economic Zones delivered the expected economic surplus to the Chinese economy.

The Guangdong region, one of the first Special Economic Zones, is currently, in terms of GDP, one of the leading economic areas of the world. The Shanghai Permanent Free Trade Zone host over 50.000 companies.  One could be forgiven for considering the grafting of legal axioms of the market economy onto a socialist society as a success, but the multiplicity of factors that distinguish a modern cross-fertilisation of legal, institutional and economic principles cannot be easily measured.

The case of the Guangdong Chinese Special Economic Zone is significant because it gives an indication of the distinctive complexity of the recent institutional transplants in South East Asia and Oceania. For instance, institutional settings similar to the Chinese Special Economic Zones were implemented as part of the decolonisation process in, for instance, Iskandar in Malaysia. Indeed, most Western-style economies have, with perhaps the notable exemption of Australia, a long history of free trade areas. The set of rules that regulates the Guangdong Special Economic Zone was not ‘cut and copied’ from Europe or from a colonial experience. These rules were specifically designed as part of a pilot scheme aimed at testing the transplants of carefully chosen aspects of a liberal economy into a socialist state. 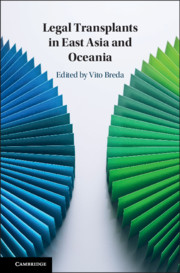 Legal Transplants in East Asia and Oceania by Vito Breda

The institutional experiment that took place in the Guangdong Special Economic Zone was the harbinger of a new wave of legal transplants that are designed to ‘fit’ into the existing socio-political structure and align with the economic potential of the East Asian and Oceania regions. The institutional settings of the Chinese Special Economic Zone were, for instance, altered in relation to the types of economic activities (e.g. services or industrial) and the size of the territory that the Special Economic Zone was intended to cover. Moving on to the third decade of that early Guangdong experiment, Myanmar has recently commenced the establishment of its own version of the Special Economic Zone in Dawei, Thilawa and Kyuakpyu. Myanmar is, by way of comparison to China, not a socialist political system, and recent Special Economic Zones are seeking to balance the aspiration for the economic development of a new democracy with the protection of autochthone businesses. Myanmar’s newly established democracy has, in turn, its own distinctive complexity. The new constitution made Myanmar, by way of comparison to China, a multinational state with a consociative system of territorial governance. The recent tuning of economic policies, which relaxed the import rules, might be one of the many amendments that are part of the process aimed at dynamically developing Myanmar’s Special Economic Zones.

It is too early to  evaluated Myanmar institutional reforms in a way that deliver a detached assessment, Legal Transplants in East Asia and Oceania intends, instead, to show the distinctive connection between multifaced policies aimed at stimulating national economies and the East Asian conception of a transparent and efficient market economy. These types of legal transplants are distinctive from the ones that, in Europe, abetted the great national codification processes and were imposed historically by colonial powers.

This collection of essay shows a regional tendency to focus on the ‘results’ and to strip transplanted institutions from cultural perceptions and doctrinal analyses. The consideration of the costs and the potential benefits that foreign-inspired legal reforms  is one of the dominant reasons that might expedite or reduce the speed of legal transplants. The book provides the reader with new knowledge of the effect of the migration of legal ideas into East Asian and Oceania’s legal systems. These new modern transplants are, in theory, distinguishable from the Eurocentric policies that were imposed using brutal imperial institutions. Modern legal transplants in East Asia and Oceania are, instead, a manifestation of multiple social-engineering endeavours managed by receiving legal systems. The book shows the benefits and a few of the shortcomings that foreign-inspired legal reforms have had in these geographical areas.

About the Author: Vito Breda