Has Religion a Future?

Though religious affiliation is declining in Western Europe, religion is a powerful and dangerous force in the modern world. In 1997 Samuel Huntington, in ‘The Clash of Civilisations’, argued that religious conflict was inevitable. In my book I oppose this thesis. I trace the growth of movements stemming from the European Enlightenment that present challenges to traditional religions. They have weakened some forms of traditional faith, but they also suggest new possibilities for the development of religious or spiritual views. In such development lies a more hopeful future for the world.

I begin by suggesting a general view of religions, without pretending to define ‘religion’, as historically and culturally developing sets of symbols of a transcendent spiritual reality. I outline ‘the perennial philosophy’, the claim that there is an ancient, often hidden, truth underlying all religions, a claim made by Aldous Huxley and Huston Smith among others, and show that it cannot be historically validated. Then I expound the main Enlightenment challenges to traditional religious views, analysing the contribution of central historical figures in this process, especially Kant, Schleiermacher, Hegel, Bultmann and Troeltsch. The chapters on these very challenging writers aim to provide readable and original insights into their key doctrines, that are scholarly enough to be of interest to scholars but also clear enough to be helpful to students of theology and religious studies.  The main issues I identify are the rise of the sciences, of textual criticism, of belief in moral autonomy, of a new evolutionary and idealist philosophy, and of an emerging historical and global consciousness.

Mainly in liberal Protestant circles, these issues have given rise to movements of religious pluralism. In this regard, I analyse the pluralism of John Hick and Wilfrid Cantwell Smith, and offer a rather different account of a pluralist view. After that, I look at developments in the generally more conservative Roman Catholic church on inter-religious relations, showing how a rather similar trajectory has been followed towards positive acceptance of the value of diverse faiths. I trace a path from Karl Rahner by way of Hans Kung and Raimon Panikkar to Paul Knitter and Peter Phan. I conclude with a case study of a published religious dialogue between Christians and Buddhists, showing that there can be strong elements of convergence, but there needs to be acceptance of an ineliminable diversity.

My overall conclusion is that religious truth lies ahead, that it will always only be partially known, and that it is best approached by a dialectical interaction of faith-traditions. There is no neutral and value-free ‘rationality’, but all religions develop, whether positively or negatively, by reaction to their immediate past in localised cultures and histories.

I think the main interest of the book may lie in its in-depth treatment of many influential scholars, in its broad overview of the history of religions, in its advocacy of the possibility of a rational commitment to a religious faith in a world of great religious diversity, and in its advocacy of a positive acceptance of pluralism and diversity in religions, which is compatible with, though it does not entail membership of, many contemporary world faiths. 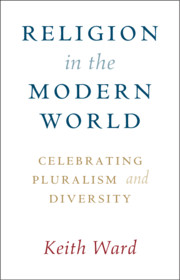 Religion in the Modern World by Keith Ward

About the Author: Keith Ward

Keith Ward is Professor of Religious Studies at University of Roehampton. A Fellow of the British Academy, he was Regius Professor of Divinity at the University of Oxford and served as President of the World Congress of Faiths. He is the author of numerous books, most recently, Christ and the Cosmos (Cambridge, 2015) and The Christian Idea of God (...