We have heard it a thousand times. The world is going downhill and it’s the “system’s” fault. To save the planet, we must change the “system.” But what do we mean by the “system”? Capitalism? Is it “capitalism” that makes nations, corporations, and individuals seek out the best deals – which promotes low-wage labor and lax environmental legislation in the global South? Could a regime change abolish the profit motive, that is our greed? Could it make us abandon fossil energy, even though it remains the main engine of economic growth? We have not seen it happen, and yet it remains the faith of millions.

This is not to deny that the world is in dire straits. But to explain our predicament as the result of some abstract “capitalist property relations” is not very informative. Capitalist property relations are the result of general-purpose money. General-purpose money means that labor, land, and machinery can be bought and owned like other commodities. We all use money, regardless of regime. If there is a capitalist “system” to blame, it is the aggregate logic of the way we use money.

We all want our share of money. We would rather see it grow than diminish. This applies equally to nations, enterprises, and individual consumers. There are countless ways to make money grow. We wouldn’t have become so good at it if the possibilities had not been there to begin with – that is, if our use of general-purpose money had not given us opportunities to make it grow. We should call the driving force by its right name. Why call it “capitalist property relations”? Why not just call it general-purpose money? Its logic is the same, regardless of regime.

General-purpose money became a driving force as late as the eighteenth century. It integrated a world economy based on trade in cotton, slaves, and other commodities. It made the Industrial Revolution possible in the core of the British Empire. By investing in fossil-fueled machinery, the cotton textile industry in Britain was able to displace work and environmental loads to cotton plantations overseas. Steam technology saved time and space in Britain – at the expense of labor time and natural space on other continents. But although slaves were bought with cotton, clothed with cotton, and picked the cotton, we learned that steam engines had nothing to do with slavery. Engineering and economics have been kept apart ever since. We have been taught that technology is about harnessing physical properties of Nature, whereas economics is about how Society is organized. Engineers still don’t need to know anything about world society, nor do economists need to know anything about nature.

After two hundred years we discover that fossil-fueled technology was not the progress we thought it was. It now runs 90% of a world economy that is obscenely unequal and projected to make the Earth uninhabitable for humans. It is time to rethink what technological progress really is. And to ask ourselves not how to overthrow capitalism, but how to redesign money. Sure, we can call it “capitalism,” but to imagine a “post-capitalist” society still using general-purpose money is a contradiction in terms. 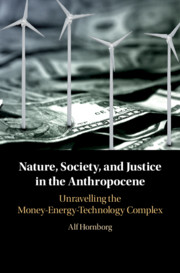 About the Author: Alf Hornborg

Alf Hornborg is an anthropologist and the Professor of Human Ecology at Lunds Universitet, Sweden. He is the author of The Power of the Machine (2001), Global Ecology and Unequal Exchange (2011), and Global Magic (2016). He has conducted field research in Canada, Peru, and Brazil....