The First “Photograph” of a Black Hole 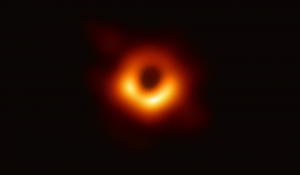 The first image from the Event Horizon Telescope, centered on the nucleus of the giant elliptical galaxy M87, does not show the shadow of the black hole’s event horizon per se. What it does show is a region somewhat larger than the horizon, where spacetime is so distorted that photons can go into orbit around the black hole without either plunging inward or flying outward. For a non-rotating black hole, this radius is 1.5 times that of the event horizon; it is somewhat smaller if the black hole is rotating. From the perspective of a distant observer, however, this photon orbit appears magnified nearly a factor of 2 by the “gravitational lensing” effect. The observed size of the shadow is consistent with the predictions of General Relativity if the black hole has a mass of about 6 billion suns, as had been deduced previously from a variety of other observations.

To see a shadow, one must first have light, and in the case of M87 this light (in the form of millimeter-wavelength radio waves) is produced in a hot torus of gas circling the black hole and spiraling in. The image appears lopsided because rotation boosts the radiation on the side approaching us, through the relativistic version of the Doppler effect. The energy source for this light is the gravitational energy released by this gas before plunging through the horizon. For the shadow to be visible, this gas has to be dense enough to produce sufficient illumination from behind and around the sides of the black hole, without being so dense that it obscures the shadow from the front. Just such a fortuitous combination of circumstances was predicted theoretically by efforts to understand the powerful jets of gas that emerge from the nucleus of M87 and travel across more than a hundred thousand light-years, boosted by the spin of the black hole.

The current configuration of the Event Horizon Telescope has neither the sensitivity nor the angular resolution to study the gaseous torus and its jet launching pad in detail, but this should improve in the future with the addition of more antennae (i.e., more collecting area), higher observing frequencies, and possibly even an antenna or two orbiting in space. This lumpy but still relatively smooth ring should then begin to reveal what a turbulent and violent place it surely is. What we can see so far tells us relatively little new about the behavior of matter this close to a black hole. But this first image does provide dramatic confirmation of some of the most astonishing predictions of the General Theory of Relativity.

About the Author: Mitchell Begelman

Mitchell Begelman, author of Gravity's Fatal Attraction is a former Chairman of the Department of Astrophysical and Planetary Sciences and Fellow of JILA, at the University of Colorado Boulder. He has won several awards, including the Guggenheim Fellowship, Sloan Research Fellowship, and the Amer...