Literature, Totality and the Global

Literature, Totality and the Global

The concept of totality has a long history. During the Twentieth Century and on in to the Twenty-First, however, there are two thinkers who have written almost obsessively on this concept and its relation to literary and cultural production.

The first is Georg Lukács (1885-1971). Lukács has a varied approach to this idea. In some of his early work, he says that the novel figures a scenario whereby the ability to connect with the world in its totality has been obscured. The novel depicts a new subjective finitude in which the character is cut off from the world as a whole. This is in contrast, says Lukács, to the older epic forms. Later, almost reversing his position, Lukács would come to designate realism as the literary form in which a vision of the individual character connecting with a social totality took place. This is where literature’s radical potential lay; to figure the individual’s connection to the whole not only maps human relations within a broader social system, but depicts characters acting on or changing that social system. This is in distinction to something like modernism, which for Lukács merely presents isolated individuals, deprived of the ability to effect social change.

The second key, contemporary theorist of totality is Fredric Jameson. In many ways, Jameson takes his lead from Lukács on the importance of totality in literary and other cultural forms, but the arguments pertain here to different aesthetic modes and a different historical epoch. One of Jameson’s basic theses is that, in postmodern cultural forms – cinema, literature, architecture and so on – we witness again an obscuring of totality, whereby something either obliquely figures this, or we are simply unable to grasp it fully from the work in question. For Jameson, totality in the postmodern era is no longer a discreet social whole but is in fact directly equivalent to the whole system of global capitalism. It is this giant world-system, in other words, that postmodern works seem unable to fully grasp.

This is one of the debates that Conceptualising the Global in the Wake of the Postmodern picks up again, but it shifts the focus in a few different ways. The book makes the argument that, in contemporary culture, we have witnessed a return to figurations of totality and that the main way this is achieved is via concepts of the global. But these figurations are not the highly oblique ones that Jameson had located in postmodern culture. Rather, what the book traces are a series of different ways of figuring the totality at an aesthetic and conceptual level, all of which are intimately linked with global phenomena, from digital networks, to world-wide capitalism and on to ecological collapse. Further, rather than suggesting that figurations of totality are restricted to a specific aesthetic mode, the book looks at a whole range of contemporary aesthetic artefacts. These include works by contemporary writers such as Mark Danielewski, Don DeLillo and Ali Smith, as well as filmmakers such as David Cronenberg, Charlie Kaufman and Patrick Keiller. These, in turn, are read alongside key contemporary theorists and philosophers such as Peter Sloterdijk, Michael Hardt and Antonio Negri, and Fredric Jameson himself. 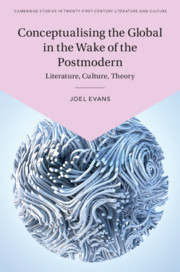 About the Author: Joel Evans

Joel Evans is Assistant Professor in Literature at the University of Nottingham. He has published articles in New Review of Film and Television Studies, Textual Practice, and Novel: A Forum on Fiction....