Are Trees People Too?

Most people know the story of king David. The young boy who beats the giant, the poet and musician, God’s favorite — this is familiar. What is less known is that when David’s son Absalom goes to war against him, the Bible credits David’s victory not to military prowess, but to…trees. “The battle was scattered over the face of the whole region. In that day, the forest consumed more people than the sword” (2 Samuel 18:8).

Fondly known as the Ent verse, the passage is reminiscent of Tolkien’s Lord of the Rings. You’d be excused for thinking it is an unusual verse. For the most part, trees don’t go to war in the Bible, right? Trees do not, in fact, join battles in any other passage, but the verse is much less unique than you might think. Trees do many things in the Bible that we do not expect trees to do. They rejoice and clap their hands (Isaiah 55:12), they wail (Zechariah 11:2), they speak (Isaiah 14:8) and they receive prophecies (Ezekiel 20:46).

If you look up these verses in commentaries, you will see that they make scholars uncomfortable. There is a long-standing tradition of assuming that ancient Israelites thought about nature and history much like we do, like modern Westerners, though they were more apt to consider God a political actor. As a result, scholars twist themselves into knots explaining why these texts do not mean what it sounds like they mean. They are indications of emotional exuberance, or metaphors for human activities, or leftovers from outmoded forms of thinking that the Bible’s editors forgot to remove.

I think a much simpler explanation is in order. Ancient Israelites thought that trees were people too. So were mountains, rivers, and stars. They were other-than-human persons, with which humans could have relationships. I don’t mean that ancient Israelites worshipped them, but that they thought natural phenomenon had their own lives, their own relationships, and their own ways of acting in the world, and that as such, they could affect human lives.

At a time when global warming is causing rapid species decline, acidifying oceans, changing tree covers, and disappearing coast lines, this rarely attended to aspect of the Bible might help us show greater care for the many creatures with which we share the world. Together with the world’s poorest people, the ones taking the brunt of climate change are insects, plants, animals, and waterways. How might our environmental ethics change if we consider these as persons for whose wellbeing we are responsible, just as they are responsible for our wellbeing? What would our lives look like, if we sought flourishing for all people, humans and nonhumans alike?

Want to know more about non-human persons in the Bible? See my book The Hebrew Bible and Environmental Ethics: Humans, Nonhumans, and the Living Landscape (Cambridge University Press, 2019). 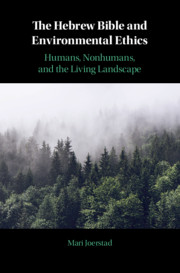 The Hebrew Bible and Environmental Ethics by Mari Joerstad

About the Author: Mari Joerstad

Mari Joerstad is Research Associate at the Kenan Institute for Ethics at Duke University, North Carolina, where she works on Facing the Anthropocene, a project funded by the Henry Luce Foundation....