A Multitude of Months: the many cycles of the Moon

For most of us, a month is a page on a calendar, a set of 30, 31, 28, or, in rare cases, 29 days. But for an astronomer a month is a period of time associated with a cycle of the moon. It turns out that the moon has many cycles, and thus there are many different kinds of months, most of which have been known since antiquity. 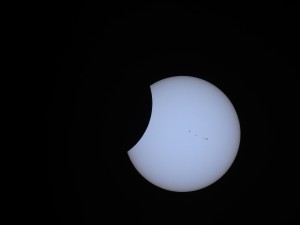 Photograph of a partial solar eclipse taken with a DSLR camera and a solar filter from Georgia, USA on August 21, 2017. Photo credit: Sandra Meek.

The most obvious cycle for the Moon is the cycle of phases (new, quarter, full, etc.) which is governed by the motion of the Moon relative to the Sun. This cycle is known as the synodic month and it lasts 29 days, 12 hours, and 44 minutes. The Moon also moves relative to the stars. It completes that cycle of motion in 27 days, 7 hours, and 43 minutes, a period known as a sidereal month.

That’s already two different months, but there are more. Ancient astronomers noticed that the Moon undergoes subtle changes in its apparent size. We now know that is because the Moon moves in an elliptical orbit around the Earth and as a result its distance from Earth is not constant. When it is farthest away (at apogee) it looks smaller to us, and when it is closest (at perigee) is looks bigger. This cycle of changes in the apparent size of the moon lasts 27 days, 13 hours, and 19 minutes, or one anomalistic month. The anomalistic month is slightly longer than the sidereal month, which tells us that the Moon’s elliptical orbit precesses – the apogee and perigee move slowly eastward relative to the stars.

But wait, there’s more! The Moon periodically crosses the Sun’s path through the stars, which is known as the ecliptic. The point where the Moon’s path crosses the ecliptic is called a node, and it takes the Moon 27 days, 5 hours, and 6 minutes to travel from a node back around to the same node. This time period is known as the draconic month. It’s a bit shorter than the sidereal month which tells us that the Moon’s orbit precesses in another way – the nodes drift slowly westward relative to the stars. 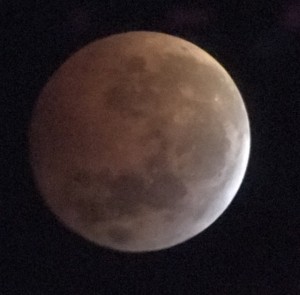 Photograph of a total lunar eclipse taken with an iPhone and a 6-inch refracting telescope from Georgia, USA on January 20, 2019. Photo credit: Todd Timberlake.

All these ways of defining the month may seem confusing, and most of us can just stick to using our calendar months. However, it was knowledge of these lunar cycles that allowed ancient astronomers to predict interesting astronomical events without our modern theories of celestial dynamics. For example, combining knowledge of the synodic month and the draconic month lets you predict solar and lunar eclipses because eclipses only occur when the Moon is in the right phase (new for a solar eclipse, full for a lunar eclipse) and also lies near one of its nodes on the ecliptic. (That’s why we call the Sun’s path the ecliptic, because that’s where the Moon must be for an eclipse to occur.) Likewise, combining knowledge of the synodic month and the anomalistic month lets us predict supermoons, where the Moon is both full and near perigee so that it appears somewhat larger than usual.

There is even a cycle known as the Saros that combines the draconic, anomalistic, and synodic months. Ancient astronomers used the Saros cycle to predict solar eclipses of a particular type: total (in which the Moon near perigee completely blocks the light of the Sun) or annular (in which the Moon near apogee is not large enough to fully block the Sun, resulting in a “ring of fire” around the Moon).

With all these months to choose from, why don’t our calendar months match up with any of them? That’s because there is no way to fit a whole number of months into one year. Our calendar is based mainly on the annual cycle of the Sun, not the cycles of the Moon, and our calendar months are only a slight nod to the way the Moon was used to track time in ancient cultures.