We focus too much on exams to understand educational inequalities

On January 3rd this year, South Africa’s Minister of Basic Education Angie Motshekga announced to a cheering audience that the national school leaving (‘matric’) pass rate had risen by 3 percent. As in previous years, critics were quick to respond: the celebrations, they said, ignored how large numbers of students dropped out before completing high school.

Around the world, governments are under enormous pressure to push more students through schools and universities — to increase so-called student ‘throughput’. However, to focus on qualifications alone is to miss a crucial point: the more people who have qualifications, the more they are devalued. This makes the cultural resources that schools bestow more important.

It has long been noted that the UK’s ‘public schools’—in reality an elite group of private schools—bestow a privileged ‘BBC accent’ and priceless social networks. Upper-class culture opens doors to jobs in business, sports, and politics. The United States, in turn, is famed for its Ivy League universities like Harvard and Yale.

But when more educated citizens chase fewer formal jobs, competition for distinction has higher stakes. One consequence in Europe and North America is large student debt, as more and more young people enter higher education. And those historically excluded from bastions of educational privilege—women, the working class, and black students—can demand a fair chance to access top institutions.

In former colonies, where substantial schooling expansion followed political independence, middle-class students access schools whose culture is still cast in the mould of European empires. As I describe in Race for Education: Gender, White Tone and Schooling in South Africa, following the end of apartheid in 1994 the ANC government placed education at the centre of its plans to build a nonracial and more equitable society. Yet, by the 2010s, student protests challenged the continued racialisation of schooling.

The racial pecking order of South African public schools is seen daily when thousands of black learners travel from townships to attend schools in white areas. The middle class, including politicians, is heavily invested in elite, formerly white, English schools that remain important incubators of whiteness in society. The government allows richer public schools to charge fees in order to channel extra resources into poorer schools.

In sharp contrast, African languages commonly spoken in rural schools continue to be devalued in society, just as they were under apartheid. Unlike the middle class, poor South Africans often leave school without being able to speak acceptable English — that is, English with the ‘right’ accent.

One belief at the heart of South Africa’s liberation struggle was that education should be for the many and not the few. But the 1955 Freedom Charter stated that not just the ‘doors of learning’ but the doors of culture should be opened, and this points to how schools must be seen as not only qualification factories but also places where cultural resources are unevenly accessed—a critical lesson that resonates today around the world. 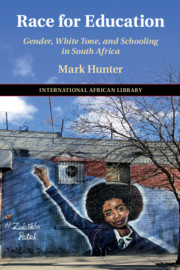 Race for Education by Mark Hunter

Mark Hunter is an Associate Professor of Geography at the University of Toronto. His book Race for Education: Gender, White Tone and Schooling in South Africa has just been published.

About the Author: Mark Hunter

Mark Hunter is Associate Professor of Human Geography at the University of Toronto. His research methods combine ethnographic, historical, and geographical techniques and his first book, Love in the Time of AIDS: Inequality, Gender, and Rights in South Africa (2010), won the 2010 Amaury Talbot Prize and the 2010 C. Wright Mills Award....