The Single Life in the Roman and Later Roman World

“Let’s discuss this further, later on”. Such were almost invariably the reactions of colleagues when, during a break at a conference or in more informal meetings, I brought up my interest for the theme of single people (sometimes called ‘singletons’) and the single life in the ancient world.

So, what do you when you feel you have a good and innovative idea?

First, try to define it properly, and to find out which research questions you would really like to address. For singleness, this is not that easy. In the terminology of present-day languages the terms used to denote ‘a single person’ point to at least three different aspects: the legal fact of not being married or not being in an exclusive relationship with another person; living alone and the possible economic or emotional consequences of this loneliness; a happy-go-lucky lifestyle mostly associated with youth. It seemed like a good start to look for these aspects in the world of Antiquity, and to see how and whether such conditions were connoted under the heading of a terminology that is somewhat similar to our singleness.

Second, try to bring together as many colleagues as possible who are passionate about the new topic and – in this case – knowledgeable about family history. You obviously need a nice place to get together, to deliver presentations and to exchange thoughts and ideas. Finding such a spot was not that difficult: the Academia Belgica in Rome was the best venue we could dream of.

Third, one needs the inevitable money and funding. The History Department of the University of Antwerp generously provided funding, as did the Roman Society Research Centre (Universities of Ghent and Brussels). Above all, I was fortunate that Sabine Huebner, Professor of Ancient History at the University of Basel, shared the same interests. Without generous Swiss funding, the conference could not have taken place. At the same time, we were kindly supported by the Istituto Svizzero di Roma, the Institutum Romanum Finlandiae and the Royal Netherlands Institute in Rome.

The conference was held from 28 to 30 May 2015, and it stuck in the in the minds of its participants as a most interesting event, full of engaging exchange and scholarly discussions. But after this, (academic) life goes on. Getting ready a volume out of the conference meant several years of hard work, patience, readers’ reports, revisions, proofreading. But, it was very much worth the effort. Readers will be treated by a first set of chapters that take fully into account the demographic, archaeological and socioeconomic conditions of singleness. Then follows a section on the Roman world: Augustan marriage legislation, Cicero, poets as Virgil and Catullus, or the image of procuresses in Augustan literature. Judaism is an integral part of the Roman Empire, hence contributions on Nazarite vows and celibacy, as well as the famous and intriguing question on Jesus being single. In late antique Christianity, singleness became an ideal as is witnessed in the chapters of the following section. Here, we encounter literary case studies on writers as Libanius and St. Augustine; the gendered aspect with an inquiry of virgins and their heavenly family; an exploration of early Byzantine literature – but also a minute epigraphical analysis of the inscriptions from Rome, and a papyrological chapter on widows and divorcées in the Coptic record. The volume ends with some highly needed comparative voices: celibacy and sexual abstinence in Early Islam, not being married in fifteenth and sixteenth century Flemish towns, and singleness in the Libri Animarum of nineteenth century Italy.

The last phase of proofreading was partly spent at my new workplace in the University of Manchester. And Fortuna has it that the book will appear almost at the same moment of the introduction of a brand new course on Families in the Greek and Roman Worlds at the Department of Classics, Ancient History and Archaeology. I can only hope that the volume will testify of the strong and vibrant research culture of our department. After all, in the words of late Beryl Rawson (1933-2010), who stood at the front of Roman Family studies: “Classics might be called the originally ‘multidisciplinary’ subject (…) New disciplines have evolved, and Classics has embraced some of those – Sociology, Anthropology, and, more recently, Demography (…) It is important, however, that we make the effort to engage with new developments. If we do not, there are two-way consequences: our own studies are deprived of possibly helpful and stimulating new insights, and other fields do not get input from us which would enhance their understanding and would help Classics be an integral part of the modern intellectual world”. 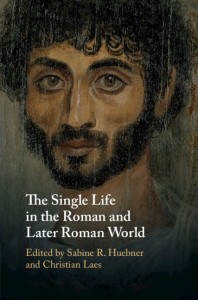 About the Author: Christian Laes

Christian Laes is Professor of Ancient History at the University of Manchester and Professor of Ancient History and Latin at Universiteit Antwerpen, Belgium. He studies the social and cultural history of Roman and Late Antiquity, paying particular attention to the human life-course: childhood, youth, family, sexuality, and disabilities. His books i...