Do You Have a Soul?

Do you have a soul? In ancient Greece, answering ‘yes’ to this question would not necessarily imply that you had any strange metaphysical or religious beliefs. This is because, for an ancient Greek, to have a ‘soul’ – psychē – in many contexts, meant no more than having life, or being alive. However, at the same time, there was also a speculative tradition, present in poets like Homer and Pindar, in the teachings of mystery cults, and in the writings of various Presocratic philosophers, which conceptualised the psychē as an entity in its own right. This soul was something that caused life, and in some way accounted for the difference between living and non-living things.

However, this latter tradition of belief about the soul was far from uniform. In the fourth century BCE, when Aristotle began to write his work, On the Soul (Peri Psychēs), there were already a number of heterogenous philosophical beliefs about its nature, none of which could fairly be called the ‘dominant’ one. Indeed, if you travelled back in time to ancient Greece and asked an educated Athenian what some of these views were, you would likely first hear about Plato’s theory. In dialogues like his Phaedrus and the Laws, he argued, on the basis of a sophisticated classification of the kinds of motions that exist in the world, that the soul must be a motion that moves itself.

You would also hear about Democritus of Abdera, a Presocratic philosopher who claimed that the soul is a kind of fire – not the everyday heat or flame that you see coming from your stove, but a subtler material that consisted of an uncountably large collection of imperceptible spherical atoms rushing and bumping about in the interior recesses of living bodies. You would also hear of even stranger theories of soul, such as the one held by the second of Plato’s successors at the Academy, the philosopher Xenocrates of Chalcedon. He argued, on the basis of some very abstract Platonic metaphysics, that the soul is a number that moves itself. How would you determine which theory is best? What criteria would you use in order to decide?

As the author of the earliest extant systematic treatise of the soul in the Western tradition, this is the remarkable historical situation that Aristotle faces when he begins to write, On the Soul. In this work, Aristotle attempts to provide, probably for the first time in Western philosophy, the foundations for something we might justifiability recognise as a psychology, or a ‘science of soul’.

In my book, I argue that Aristotle developed his own distinctive view that the soul is the ‘first actuality of a potentially living body’, by meticulously working through the problems and prospects he found in earlier Greek theories of soul. By tracing out his attempts to deal with their theories in detail, I argue that we also gain new insights both into Aristotle’s theory of scientific inquiry, and into the history of the mind-body problem. 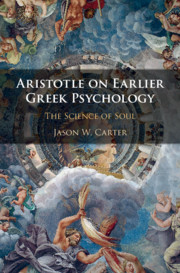 About the Author: Jason W. Carter

Jason W. Carter is Teaching Fellow in Philosophy at the University of Edinburgh. His work has been published in journals including Phronesis and the Journal of the History of Philosophy....