Determining the truth about the past is rarely a simple task.  Party officials overseeing the post-Mao transition in 1980s China were evidently aware of this, as they sought to salvage historical memory in the aftermath of the Cultural Revolution’s campaign to destroy the “four olds.”  They set out on an ambitious state-sponsored oral history project, known in Chinese as the wenshi ziliao (translated literally as “cultural and historical materials”).  Mobilizing teams of local interviewers and editors in counties, cities, and provinces across the country, their aim was to collect survivors’ first-hand testimonies about historical events that the Party deemed significant, especially events that had occurred before the Communist Party took over in 1949. In Borderland Memories: Searching for Historical Identity in Post-Mao China, my research centers on the place where it all started, the strategically important Sino-Russian borderland in what was formerly northern Manchuria.

This experiment with political transition and reconciliation was a nation-wide project.  Why do you choose to focus on China’s northeast borderland with Russia?

This is the place where the project, and the organization that oversaw it, took form.  I use it as a case study for understanding how local elites who had been persecuted during the Cultural Revolution collaborated in an uneasy alliance with Party officials to recover lost pasts and construct new post-Mao ideologies and historical identities.  So you could say that the region’s specific historical character was important in shaping the project and how it unfolded.  What was this special character?  In a word, messy.  The Manchus, Chinese, Russians, and Japanese all vied for dominance in the region, and waves of cross-border migration made the situation even more complex.  Yet it was precisely this messiness that participants in the project found useful for accommodating and reconciling different aspects of post-Mao ideology and identity.

How did this book come to be?

It all started early in my Ph.D. program when I became interested in learning more about a massive wave of migration by Chinese to the politically contested frontier of Manchuria.  While doing research in the former Manchu capital of Shenyang, I became enamored with a rich collection of oral history narratives that captured in vivid detail the colorful life worlds of entrepreneurial migrants who had set their sights on Manchuria in the early 1900s.  Realizing that these accounts were part of a nationwide state-sponsored oral history project overseen by the post-Mao state in the 1980s, I shifted my focus to understanding the politics of memory production during China’s early post-Communist transition.

What about the research surprised you?

The wide range of perspectives in the published oral history testimonies that did not appear to conform to the standard Party version of history.  I was intrigued by how and why this unorthodox medley of voices made their way into an official project overseen by the Party.

What is the biggest takeaway that you want readers to gain from this book?

That there was a moment in the 1980s when the Party, in its effort to construct its post-Mao ideology and reconsolidate its political base, not only permitted but actively encouraged the inclusion of a broad spectrum of viewpoints about what constituted historical truth, and that recovering the history of the northern Manchurian borderland was an important part of this strategy.   Seeing the Party’s tightening restrictions on and narrowing definition of what counts as permissible discourse in China today, I think that it is important to look back to this transitional moment when the post-Mao leadership saw diversity and heterogeneity as a positive and integral part of unifying the nation and legitimizing the party.

Would you say, then, that at least in the 1980s under the post-Mao party-state there was real freedom of expression to talk openly about the past without any danger of reprisal or persecution from the government?

I would not go that far.  For one thing, no memories of the most recent and controversial past, the previous decade of the Cultural Revolution, were permitted for inclusion in the oral history project.  There was also no overt criticism of Mao or any past Party policies or decisions, in spite of the fact that many of the participants had suffered in various political campaigns in the 1950s and 1960s.  However, informants and editors were able to approach the subject of pre-1949 history with a startling variety of perspectives that highlighted local and regional achievements and borderland identities, often celebrating the achievements of entrepreneurial individuals who operated at a distance from or independently of the Party and communist ideology.

Yes and no.  There was some continuity.  For example, wenshi ziliao organizers adopted Maoist techniques for mobilizing people politically, and they also explicitly invoked concepts that were central to Chinese Communist Party ideology and traditions. However, they redefined Party ideology in ways that justified more complex and nuanced approaches to representing the past.  They also experimented with a variety of different local perspectives on what revolution and national liberation meant.  This placed local business and cultural elites in an important new role in constructing historical truths and identities.

Can you say more about what truth and reconciliation meant in the context of this oral history project?

This project gave people who had been persecuted during the Cultural Revolution the opportunity to tell their stories, gain exoneration from political crimes for which they had been accused, and in some cases receive material compensation for wrongs that had been committed against them.  But the Party was not wiling to hold itself accountable for these past crimes, since after all it was overseeing its own political transition.  The clear differentiation between victim and perpetrator in, say, South Africa’s Truth and Reconciliation Commissions was not on the table.  Instead, the organizers and editors of the wenshi ziliao blurred the lines between victim and perpetrator by emphasizing “complexity” and “multiple sides,” and they were careful to avoid any discussion of recent controversial subjects like the Cultural Revolution. 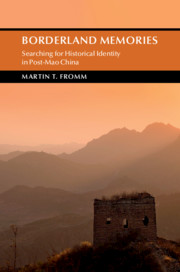 About the Author: Martin T. Fromm

Martin T. Fromm is an assistant professor at Worcester State University. He is the editor of the academic journal Currents in Teaching and Learning....