What makes one crime story convincing and another doubtful, inside and outside the courtroom? I tackle this question in my new book Plausible Crime Stories: The Legal History of Sexual Offences in Mandate Palestine, as I explore the concept of ‘plausibility’, a rhetorical quality pertaining to persuasion. The plausibility of a crime story is contingent on various factors, including the identities of the story’s narrator, listeners and protagonists, the emotions which accompany its telling and its compatibility with dominant cultural narratives. This contingency lays the foundation for an analytical framework addressing the elements that constitute the plausibility or implausibility of factual accounts of crimes. I argue that the doctrinal rules of evidence only partially explain which crime stories make sense. A fuller comprehension of a story’s plausibility and its ability to persuade an audience requires uncovering the socially constructed knowledge on which the story relies. Toward this end, Plausible Crime Stories takes a ‘law in action’ approach and deciphers plausibility in a particular historical and socio-cultural setting.

The plausibility of a story, and thus its persuasiveness, relies on context-bound knowledge, reasoning and sentiments shared by members of a distinct social group in a given time and place. The socio-legal history of plausibility, I argue, can shed light on actual practices behind the process of proof and reveal the socially constructed nature of the supposedly neutral and technical mode of factual determination. 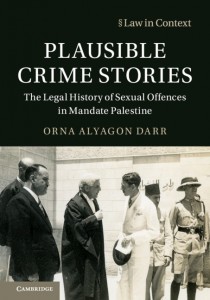 Plausible Crime Stories explores the plausibility of sex offence stories in Mandate Palestine (1918–1948). The study is based on 147 criminal court cases, the complete corpus of sex offence cases surviving from the Mandate era. The site, topic and primary research materials offer several methodological advantages. Both legal history and feminist scholarship demonstrate sexual crimes to be fertile ground for the study of the social embeddedness of legal proof. Criminal prohibitions regulating sexuality are soaked in moral and cultural perceptions and therefore provide a convenient platform for conducting socio-legal research. Mandate Palestine was a land of social, ethnic and political cleavages, and its inhabitants held a range of attitudes, beliefs and perceptions pertaining to sexuality and its regulation and diverse views on the question of what constitutes a convincing as opposed to an unconvincing sex crime story.

What makes one crime story convincing and another doubtful, inside and outside the courtroom?

The primary materials from the Mandate era contain rich information about the diverse participants in judicial proceedings and about other social players, including their ethnic and national identity, gender, socio-economic status and occupation. This information allows contextual interpretation that takes into account the social attributes of crime story narrators and their listeners. The texts reflect not just the hegemonic perspective of the British rulers but also social meanings and interpretations voiced by an array of local actors, including those who were judged, examined and labelled. Their voices are often silenced in historical and sociological accounts and bringing them to centre-stage provides a lucid portrait of previously unexplored social issues in Mandate Palestine.