Should prostitution, or the buying and selling of sexual services, be legalized? Similarly for the monetary exchanges of many other controversial items like kidneys and other organs, blood, surrogate motherhood, line sitting/standing, etc. Should essential goods like water be priced at their full social costs of supply? Should more monetary fines be used in place of imprisonment? More generally, should market exchanges, especially with the explicit use of monetary payment be allowed to expand to cover more areas? These are interesting, intriguing, and important questions both in practical public policy, personal conduct, and moral philosophy.

The use of market exchanges, especially after being facilitated by the use of money, and the resulting division of labour, has resulted in tremendous improvements in our productivities in supplying goods and services. This spectacular growth has also gained from scientific and technological advances. However, these latter advances are themselves promoted by the division of labour made possible by market exchange. In the case of light, quite literally, ‘we can now buy more light with 10 seconds of labor than a caveperson could have bought with 60 hours of labor’ (Brennan & Jaworski, 2016, p.166). This is 21,600 times! An average person in most countries can now consume a basket of goods beyond the reach of ancient kings

Despite the tremendous advances from market exchange, many people are against its expanded use in many areas. Three reasons have been commonly advanced for this position.
• First, the use of monetary payment may crowd out intrinsic motivation, altruism, and morality in general. Though some such crowding out certainly exists, there may also exist the opposite effect of crowding in. Even if crowding out dominates, it may not be important enough to offset the direct effects of exchanges, especially for cases of kidney sales where life-saving is involved.
• Second, we are born and nurtured to be in favour of equality and against market exchanges and feel repugnant against the purchase and sale of such human organs like kidneys. However, educated morality should suggest that the proper feeling for such exchanges should be sympathy for both sides: those desperate enough to sell and those desperate enough to buy to save life or reduce serious disadvantages.
• People on very low incomes may be ‘compelled’ to sell their organs, making such transaction unfair. In the absence of serious ignorance and/or irrationality, inequality alone cannot be a case for the prohibition of voluntary  market exchanges. We should perhaps try to increase equality and reduce poverty more. However, for whatever level of equality achieved, if some still find it desirable to sell a kidney under full information and rationality, how could prohibition help them?

The expanded use of markets is a desirable result of progresses in division of labour, liberalism, and understanding of economics. Thus, we should legalize prostitution and organ sales, with appropriate regulations; price water, electricity, and car parking more adequately; use more fines than imprisonment. On prostitution, we only have to compare say Australia with legality and China without legality. Like the prohibition of alcohol in the U.S., prohibition did not and does not stem out the practice, but leads to more problems of health, crime, corruption and a lower esteem for law-abiding. The case for legalization is over-whelming.

However, we may keep blood donation unpaid, provided that a lesson on the beneficial effects to the donors is introduced in high schools, which will make voluntary donation more than sufficient to meet requirement. One important reason for this is that, in our long history of evolution as hunter-gatherers, we routinely lose blood. Thus our body is designed to replenish this regular blood loss. But modern living results in almost no loss of blood, which is thus less healthy. We may offset this by regular blood donation, also benefiting others. 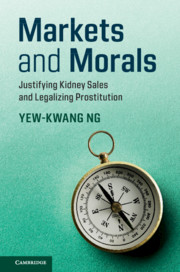 Markets and Morals by Yew-Kwang Ng

Professor Ng Yew Kwang (黄有光, known as Yew-Kwang Ng in academia), has been a chair professor of economics at NTU during Jan 2013- April 2019. Globally renowned in welfare economics, Prof Ng is a fellow of the Academy of Social Sciences in Australia. In 2007, he received the highest award (Distinguished Fellow) of the Economic Society of Austra...