Magnetohydrodynamics: Classical physics for the 21st century (and beyond!)

This blogpost advertises our new Cambridge University Press book Magnetohydrodynamics of Laboratory and Astrophysical Plasmas [1], by Goedbloed, Keppens and Poedts. We encourage all colleagues to send us feedback and criticisms, for possible future editions. Comments on the blog itself may be directed to its author, R. Keppens [email protected]

Modern astrophysical research is truly entering a new era: one where the prominent role of magnetic fields is no longer ignored. For decades, entire branches of astrophysics would dismiss inclusion of magnetic fields in their descriptions of our universe, and mainly focus on gas dynamics, intricate radiative processes and weak to strong gravitational interactions. This allowed enormous progress in our understanding of e.g., stellar structure and evolution, stellar winds, accretion disks, exoplanet formation and characterization, dynamics in stellar binary systems, or in galaxy formation and interaction. Meanwhile, all these topics, and many other where high energy phenomena are involved, ‘turn on’ their magnetic fields, to discover a whole new world: the world of magnetohydrodynamics.

One concrete example – that stood the test of time – is the Millennium Simulation project from the Virgo consortium[2], where collisionless, cold dark matter gravitationally interacted throughout cosmic history, in the then largest ever N-body simulation. The model turned out surprisingly accurate in its predictions for how galaxies form and cluster, despite the fact that it was completely deprived of the universe most abundant, known state of matter: the plasma state. The decades that passed since this breakthrough result witnessed the inclusion of hydrodynamical interactions (incorporating baryonic matter, influenced gravitationally by the elusive dark matter) and in the most recent efforts: magnetohydrodynamics.

In contrast to popular belief, magnetohydrodynamics (MHD) is not merely adding a Lorentz force to the momentum equation, or passively advecting pre-existing magnetic fields. Instead, MHD does justice to that part of our universe which dominates our understanding: the intricate multi-scale and long-range behavior of plasma physics. This is classical physics, revisited, joining everything we care for at scales intermediate between the quantum realm, and the regime in which we rely on ‘dark’ components to make the models work. In between these two extremes, an enormous range of scales – from the size of atoms to those of stars and galaxies – benefits from the powerful scale-invariant MHD description that covers precisely this gap. This scale-invariance implies that MHD also governs plasma physics at human scales, which we will harvest in our future power stations running on controlled nuclear fusion (pursued in large-scale international efforts like ITER[3]). This link between laboratory and astrophysical research is a major advantage, where theoretical predictions for waves and instabilities touch base with physical reality through measurement.

The MHD model turns out gifted with mathematical beauty akin to quantum theory: its spectrum of eigenfrequencies and corresponding natural vibrations is organized, with Nobel-prize winning Alfvén waves at its very center. These eigenoscillations can be witnessed in operational fusion-aimed experiments, and they agree with theory, which must account for the donut-shaped magnetic cage created for the plasma. Magneto-seismology will undoubtedly become the natural descendant for seismological studies of stellar structure, solar and stellar coronae, or accretion disk dynamics. Since the solar interior is already known to promille accuracy – thanks to seismological inversions which ignore magnetic fields – time is ripe to investigate how combined ingredients of shear flows, rotation and magnetization modify the plasma eigenstates. In accretion disks about forming stars or compact objects, central to our current focus on exoplanet systems or on getting the first images of black hole shadows, modern astrophysics already realized that magnetic fields are vital to drive accretion and to launch collimated, jetted outflows. 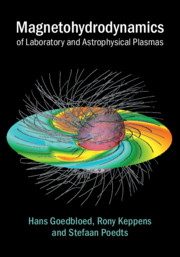 Magnetohydrodynamics of Laboratory and Astrophysical Plasmas, 2019 by by Hans Goedbloed, Rony Keppens and Stefaan Poedts

MHD theory has also been the main backbone for solar physics, studies of turbulence and magnetic reconnection, as well as magnetospheric and heliospheric investigations. MHD explains how our Earth’s magnetic dipole operates and protects us from the supersonic solar wind, through generating our magnetosphere. Our current society, relying heavily on GPS and telecommunication, is vividly aware of the havoc that can result from a powerful solar flare, and is rightfully investing in MHD-based predictive efforts for space weather alerts. Plasma physics and MHD modeling are at the forefront of High-Performance Computing efforts, and already demonstrated that one can model Sun-to-Earth solar coronal mass ejections (see e.g. the cover image of Magnetohydrodynamics of Laboratory and Astrophysical Plasmas[1]) faster than real time. Similar breakthroughs have been realized in modeling solar prominences, which condense through radiative losses in the million-degree corona. More energetic processes, incorporating Einstein’s theory of special relativity, require accounting for the full, unmodified set of Maxwell equations, and relativistic MHD successfully reproduced multi-wavelength views we share on past cosmic explosions, such as the Crab pulsar wind nebula.

The most recent excursions of MHD theory and simulation are at the heart of the latest efforts to understand the new multi-messenger approach to our universe, where gravitational waves opened up a new observing window, next to traditional electromagnetic signals. General relativistic magnetohydrodynamics – GRMHD in short – is actively used to mimic the most powerful explosions in our universe (gamma-ray-bursts) resulting from merging neutron stars. The combined equations of general relativity with a (multi-)fluid-based plasma description contain all signals we can capture through our telescopes or gravitational wave detectors, and hence represent a powerful toolbox for generations to come.

About the Author: Rony Keppens

Rony Keppens, author of Magnetohydrodynamics of Laboratory and Astrophysical Plasmas 2019, is Professor and Division Chair at the Centre for mathematical Plasma-Astrophysics, Katholieke Universiteit Leuven. He headed numerical plasma dynamics teams at FOM-Institute for Plasma Physics 'Rijnhuizen...