Is Your Brain Dysfunctional?

The neuroscientist Kent Kiehl – popularly known as the “psychopath whisperer” – thinks that many psychopaths have brain dysfunctions that explain their violent behavior. Famously, he served as an expert witness on the defense of rapist and murderer Brian Dugan. He argued that Dugan’s brain abnormalities should make the difference between the death penalty and life in jail. When I first encountered Kiehl’s work, that solution struck me as humane and moral.
But it prompted me to ask a deeper question: Who gets to decide whose brain is “functional” and whose brain is “dysfunctional”? In other words, I’d like to think that my brain is functional, and that Brain Dugan’s brain is dysfunctional. But maybe I’m just biased. Could Dugan, with equal rights, say his brain is functional and mine dysfunctional? Or perhaps, if we want to be objective about all this, we should just say that my brain and Dugan’s brain function differently. Indeed, some philosophers insist that the whole idea of a brain “dysfunction” is just a projection of our own subjective moral attitudes, and nothing more.
These questions ultimately led me to write a book, What Biological Functions Are and Why They Matter. Here, I dive into a long-standing philosophical debate: what are functions? And what are dysfunctions? Contrary to some philosophers, I argue that functions aren’t subjective or value-laden. Whether or not Dugan’s brain is functional or dysfunctional is an objective biological fact, as objective as the number of fingers on my right hand. Saying that functions are subjective and value-laden makes a mockery of biology, medicine, and even law, which uses rigorous scientific evidence to establish function and dysfunction.
Let’s go a little deeper. In the book, I develop a version of the selected effects theory of function. In short, if you want to know what a trait’s function is, you have to look at what natural selection designed it for. What’s the function of zebra stripes? It’s whatever natural selection designed them for. (Our best current guess is that stripes have the function of warding off biting flies, but that’s another story.) But wait a minute, you might think! Can we ever truly know what natural selection designed the stripes for? Figuring out how zebra’s stripes evolved seems like so much speculation and guesswork.
That’s a valid worry, but my version of the selected effects theory – which I call the “generalized selected effects theory” – avoids that worry altogether. That’s because by “natural selection,” I don’t just mean the evolutionary kind. Trial-and-error learning can be a kind of selection, too. When a rat learns to stand on its hind legs to get a piece of celery, it’s selecting among different behaviors. Even brain synapses undergo a kind of selection, when one synapse is preferred over another because of some useful effect. Natural selection works at many different levels and time-scales, so new functions are constantly cropping up over the course of our lives. Although I can’t tell you whether or not Brian Dugan’s brain is dysfunctional – I’m a philosopher, not a scientist – one goal of my book is to give scientists the conceptual tools they need to figure it out. 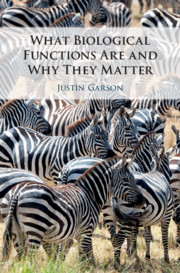 What Biological Functions Are and Why They Matter by Justin Garson

About the Author: Justin Garson