In Treaty we Negotiably Trust

“To treat is but to negotiate and to be ‘in treaty’ is but to be in negotiation”. Clive Parry. Cambridge Author, Evangelos Raftopoulos, talks about his new book, 'International Negotiation: A Process of Relational Governance for International Common Interest'.

“ Ώστε η θεού ενέργεια, μακαριότητι διαφέρουσα, θεωρητική αν είη. Και των ανθρωπίνων δη η ταύτη συγγενεστάτη ευδαιμωνικοτάτη” ( “ It follows that the activity of God, differing from beatitude, is theoretical.  And among human activities that activity which is the most akin to the divine activity will be the happiest” (transl. mine))  Aristotle, Nicomachean Ethics, Book X, viii, 8.

There is a challenging and refreshing approach in my new book “International Negotiation: A Process of Relational Governance for International Common Interest” that maintained my spirit daringly devoted and my interest creatively alive throughout the years of its writing. I propose a relational theory that systematically unveils the interrelationship between International Negotiation and Treaty as a process of relational governance constructing International Common Interest (ICI), thus raising a fundamental theoretical claim and a practical platform for an interdisciplinary and more knowledgeable understanding and conduct of international negotiation.

Prenegotiation sets the scene of multilateral governance transforming a problematic or conflictual situation into a relational activity developing ICI. Such transition requires knowledge of the Prenegotiation management and organizational techniques and strategies used by its initiator (usually, by a state or an international organization). It leads to a patterned declarative instrument pursuing ICI and based on political consensus. Constitutive Negotiation sets up the platform for the collective establishment of an ICI treaty regime. Here, negotiation is rigorously examined as an intersubjective relational process whereby a new treaty is “constituted” as a collective normative activity pursuing ICI on a consensual basis and by consistent reference to its context. The knowledge of the institutive processes organizing constitutive treaty negotiation (Political Initiative, Ad Hoc Body of Conferential Negotiation, Rules of Procedure, the Guardian role of the Secretariat, Consensus Procedure) is instructive. Equally instructive is the knowledge of legislative-like constructive processes of constitutive treaty negotiation where the textual pattern of the treaty instrument takes centre stage, specifically associated with three levels of treaty patternment that provide the necessary normative material for the construction of ICI: referential patternment (context identification, contextual compatibility, and “added value”); morphological patternment (“framework agreement – performative protocols” or “integrative agreement – executing annexes”); and normative content patternment . Correspondingly, the knowledge and appropriate use of organizational and textual techniques and practices, creatively contribute to the progress of constitutive negotiation. Finally, Renegotiation is explored as a structured, intra-institutional process of revisionary governance of an operating treaty regime. Reinforcing its relational resilience, Renegotiation builds on the structural and procedural characteristics, techniques and the treaty-patternment approach of Constitutive Negotiation, while it properly integrates some methodical elements of the Prenegotiation. It is set in operation through the amendment clause of the treaty, the treaty Secretariat operates as an institutional guardian of the regime and its contextuality further encompasses a particular context of reference generated by the institutional life of the treaty regime (derivative context). Renegotiation may also refer to the declarative components of a treaty regime (action plans), and it may develop in the twilight zone between Constitutive Negotiation and Renegotiation

Indeed, in treaty we negotiably trust. But international negotiators should be conscious and knowledgeable of “the fact beyond”, retrospectively and prospectively: that they are involved in the perennial and intricate process of constructing ICI. This is “the situation sense” and the creative force governing the action of an International practitioner. Broader, this is a call to international scholars and theorists to cross artificial methodological constraints and work creatively by “thinking” and “seeing” the interconnections in international ordering. And, overall, this is an activity of a “theory at work”. 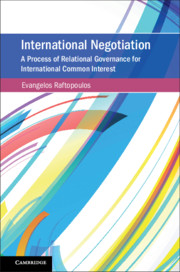 About the Author: Evangelos Raftopoulos

Evangelos Raftopoulos is Professor of International Law and International Environmental Law at Panteion University in Athens, Greece and a Founding Director of MEPIELAN Centre/Panteion University, Athens, an officially accredited UNEP/MAP partner, and a member of the Mediterranean Commission on Sustainable Development. Educated in Cambridge (PhD (C...