Written by: Frank B. Farrell

Certain intellectual schemes make reality come off as thinned out and characterless on its own, prior to what thought or language projects upon it, or as a site of emptiness, arbitrariness, and ruin, prior to some drastic change that must have an out-of-nowhere or messianic quality. Often these schemes have their deep origins in late-medieval theological voluntarism. If God’s will is absolutely free, omnipotent, and unfathomable, then things in the world must lose completely any metaphysical character that they have on their own and that humans might hope to comprehend. One response is a retreat inward, a consolidation of an inner space where humans manipulate inner entities and maintain, at the end of a process of cognition they neither understand nor plausibly control, a faculty of free will, of assenting or dissenting.

I trace how the metaphysical and epistemic space thus constituted kept shaping later philosophies, including those of Locke and Kant. I argue that twentieth-century empiricism, notably in Russell, Carnap, and Quine, is deeply indebted to the theologically defined structure thus described. We see with these thinkers what happens when one still works within a landscape structured by earlier theological considerations but has given up the religious premises behind them. Without God to back aspects of that picture, we not only lose metaphysically determinate individuals and reference, as in Quine’s thought experiments about rabbits, but also innerness, meaning, belief, and intentionality. There are recent thinkers, however, who give us the resources to overcome that theological legacy. John McDowell proposes an account of mind and world that resists any picture by which the capacities that place us within the space of reasons begin to operate only partway up the chain from worldly objects to beliefs. I argue, as McDowell himself does not, that the problematic view he opposes is precisely the one formed by the late medievals. Saul Kripke argues against the collapse of metaphysical necessity into epistemic necessity into logical necessity. Like McDowell, he does not present himself as undoing the late medieval framework, but this is what he does, such that we might even call him Aristotle redivivus. Wittgenstein and Daniel Dennett undermine the notion of interiority that was consolidated as a reaction to the late-medieval situation.

In a different tradition Hegel seeks to overcome that theological legacy by defining a “divine” activity that is the opposite of the voluntarist one: it is necessarily self-manifesting in the activities of humans across history. He thus secularizes Christian notions of the Incarnation and of the reconciling work of Spirit. (I oppose my reading to Robert Pippin’s.) I then turn to twentieth-century anti-Hegelians who defend a divine-like principle that is radically other, sublime, and incommensurable, such that any attempt to establish metaphysical or psychological determinacy must be discredited. Walter Benjamin produces an amalgam of radical Marxism and a mystical Jewish messianism to offer a profoundly anti-Hegelian picture. I show how his notion of allegory in German baroque drama actually expresses and shapes both his religious and his economic attitudes. Jacques Derrida can also be read as vehemently resisting all aspects of the Hegelian picture in favor of a “divine” that is closer to the late-medieval one. Certain writers of literature follow Benjamin in defining a sublime absence that undermines the idea of aesthetic experience.

I defend the Anglo-American philosophers who overcome the heritage of theological voluntarism, while I question those European thinkers who would establish a new version of that theological picture. We can accept the idea of a world that is metaphysically richer on its own and that is eminently worth valuing. 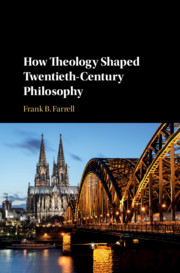 How Theology Shaped Twentieth-Century Philosophy by Frank B. Farrell

About the Author: Frank B. Farrell

Frank B. Farrell is Emeritus Professor of Philosophy at Purchase College, State University of New York. His publications include Subjectivity, Realism, and Postmodernism: The Recovery of the World in Recent Philosophy (Cambridge, 1994) and Why Does Literature Matter? (2004)....