Over recent decades, financial markets have led the global economy into a number of major collapses while contributing significantly to both economic inequality and political instability, yet regulatory approaches have not fundamentally changed their course. From both conventional and discrete angles of analysis, the accumulation of market and regulatory failures just before a crisis appears seem intractable. The Political Economy of Financial Regulation, which we had the pleasure of editing, contains 16 insightful papers addressing the multifaceted nature of the problems facing financial regulation, with particular focus on systemic relationships within decisions, information, understanding and power – the will to use it, and the reasons for using it – as well as the complexity arising from the fragmented and rent-seeking nature of modern finance.

The volume includes ten papers from law and finance scholars and six from economists and political scientists giving flesh and meaning to the term political economic analysis. The breadth of coverage is unprecedented. The papers in the volume examine from a political economy perspective six national and supranational regulatory systems as well as the conceptual and epistemological frameworks underlying market structure and regulation. The analyses are empirical in the tradition of social science methodology as well as doctrinal in the tradition of law. They include institutional comparisons among national regulatory systems and between national and international frameworks, as well as epistemological and conceptual analyses of the underpinnings of the financial system and its causal relationship to law on the one hand and the economy on the other.

…financial markets have led the global economy into a number of major collapses, yet regulatory approaches have not fundamentally changed their course…

The combined result dissects the constituent elements of financial regulation within a prism of perspectives, allowing the study of its epistemological and conceptual bases and structural designs, both with regard to economic function and constitution/allocation of national and international regulatory power. Requisite analysis also extends to offer explanations of how the human agents charged with the implantation, operation and application of financial regulation have dealt with their power vis-à-vis rich and influential constituencies, including financiers, other industry actors, and consumers.

From the theoretical underpinnings of law, market order, and the financial regulation ecosystem to the special problems of developing countries and state managed economies, The Political Economy of Financial Regulation shows that financial regulation is not only in need of political economic analysis, but that such analysis might provide the brightest light for understanding the interplay of complex political and market dynamics that dictate the tempo of reform to fix finance.

The international assortment of papers in this volume show that different problems arise in different legal systems within countries at different stages of economic development. Papers examining the United States and Europe tend to reveal the ways in which powerful economic actors have either prefigured the legal environment or influenced its regulators in order to tip the scales in their favour. Those papers call for stronger, more objective or differently constituted government action. Papers examining the state-controlled Chinese economy, by contrast, look to ‘market efficiency’ and ‘public choice’ as high and independent forces free of government control to counterbalance what they see as too much government guidance and ownership. These papers thus call for stronger private actors rather than stronger regulatory action.

For example, the unique content of this volume offers view of a peculiar crossroads in the theoretical basis on which regulation rests. Economics, psychology and legal analysis have now shown that market ‘efficiency’ and ‘rational actors’ have never existed in the idealized sense embraced for decades around century’s turn, yet in the developing state-managed economy of China, these theories are now being embraced as sincerely as they were from the 1980s in the US or from the 1990s in Europe. The chronology of the analytical gap between China and the West shows that theory’s use can be aspirational, and an understanding of the aspirational function of ‘market efficiency’ in working through the transition from a planned to an unplanned economy could provide insight into why these same conceptual supports were embraced as absolutely true at a time when western economies decided to move their industrial and commercial economies to a finance-centred model.

This crossroads was visible in the US and a choice was made during the Postwar era. Herbert Simon, who is the creator of ‘bounded rationality’ and the theory of limited judgment according to heuristics, and Paul Samuelson, who is the creator of a mathematical economics based on the perfect laws of physics assuming rational actors in efficient markets, both published their doctoral dissertations in the same year – 1947.  Simon was relegated to management studies and Samuelson became the founder of modern, mathematical economics and the temple of market efficiency. More recently, Simon’s work has been on the rise, but the Samuelson option is still seen very attractive in China.

The papers in The Political Economy of Financial Regulation, by systematically investigating the financial regulatory framework and its keepers from several disciplinary angles and a transnational perspective, bring to light this previously unnoticed crossroads between the inherently efficient and the bias-loaded perceptions of the market. The reader will find much more than this one example. Indeed, we are confident the content of this book will form the basis of much future regulatory scholarship on financial regulation. 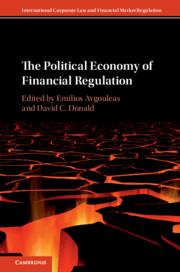 About the Author: Emilios Avgouleas

About the Author: David C. Donald

David C. Donald has been a Professor in the Faculty of Law at The Chinese University of Hong Kong since 2008. From 2003 until 2008, David taught at the Institute for Law and Finance of Goethe University. For the decade preceding that he worked as a commercial, corporate and securities lawyer in Washington, Milan, Rome and Frankfurt. David's publica...