The Bird Box and Jim Crow

It was reported that at least 45 million people watched the 2018 Netflix movie “Bird Box” in its first week. I was one of them (spoiler alert). The film focuses on a dystopian society in which a woman (played by Sandra Bullock) attempts to travel down a river and through a forest with two young children (simply called, Boy and Girl) in tow. No problem. Right? Wrong. They must make the trek blindfolded lest they glimpse an invisible force that causes insanity and suicide. Bullock’s character has watched a motley group of survivors dwindle to three. She is now the sole protector/provider. I liked this film. It had a good mix of suspense, horror, science fiction, and romance and justified eating a bag of buttered popcorn.

But I am a sociologist, so a movie is never just a movie. Moreover, I had just submitted the page proofs for my upcoming book, The Kings of Mississippi: Race, Religious Education, and the Making of a Middle-Class Black Family in the Segregated South about a rural, black farming family, so my thoughts about dystopian spaces were fresh. By definition, a dystopia is a society or community characterized by negative, violent, frightening situations that tend to dehumanize people. “Bird Box” is a movie, but the parallels between it and The Kings of Mississippi are stark.

The Kings of Mississippi documents the experiences and challenges of a black family navigating segregation. Most dystopian stories are set in the future. In contrast, the King’s story takes place in the past. Jim Crow laws were passed in the late 19th and early 20th centuries and were enforced until about 1965. And its specter loomed large, resulting in the systematic political, economic, and social oppression of blacks. Like the Kings and the people in the movie, how do you fight something you can’t see, but that can cause your death? How do you maintain your sanity and some semblance of normalcy in a society largely devoid of these features for you and yours? Paralleling the movie, the apocalyptic effects of Jim Crow meant watching people you love die literally and figuratively, others go insane, some sacrifice themselves for you, and still others steer you to safety.

For the Kings and many blacks like them, daily life in the South meant symbolically “blindfolding” themselves to avoid the direct onslaught of Jim Crow – and adaptively living through the fallout. The enemy wasn’t an invisible force, but flesh and blood people and processes linked to racial stratification. Boys or girls – regardless of their names – were often nurtured by mothers, fathers, Other Mothers, and other fictive kin based on a village mentality. And just as chirps unexpectedly provided safeguard in the film, an unassuming matriarch, Irma, fostered the King’s successes. My research across seven generations, including family narratives and census data, show how the Kings parlayed religion, education, ties to a homestead, strategic migrations, a linked fate mentality, and faith in God and themselves, into the middle class. They, like the movie’s family, were fighting for security, stability, and safety.

“Bird Box” is just entertainment. Alien invasions are not real. Similarly, Jim Crowism as it played out in the U.S. South no longer exists. Yet art often imitates life. Movies can serve as escapism. The Kings and Jim Crow were real and serve as a source of education about trials and triumphs that are an indelible part of our history. 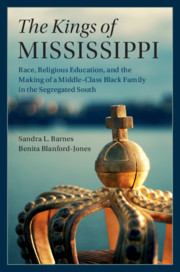 The Kings of Mississippi by Sandra L. Barnes , Benita Blanford-Jones

About the Author: Sandra L. Barnes

Sandra L. Barnes is a Sociology Professor in the Department of Human and Organizational Development at Vanderbilt University and the first female African American Assistant Vice Chancellor. She is the author of Empowering Black Youth of Promise (2016), Live Long and Prosper, and The Costs of Being Poor (2005)....