While accessing oral histories and autobiographical writings about Indigenous participation in the Second World War, I had a strange epiphany: very few firsthand accounts ever explicitly explained why they got involved in the war effort. There were some hints here and there about the economy or tradition, but many Indigenous men and women who enlisted did not even feel the need to answer a question ‘why’. To them, it was self-evident: there was a total war going on, and they, too, were going to participate in it.

This realisation had a striking resonance with Scott Sheffield and me as we were writing Indigenous Peoples and the Second World War: The Politics, Experiences and Legacies of War in the US, Canada, Australia and New Zealand. As historians who have long studied the structures of settler colonialism, a guiding question of our research was: Why, despite centuries of violence, dispossession, segregation and racial discrimination, did Indigenous people come forward in substantial numbers to serve in settler militaries?

The ‘self-evident’ nature of Indigenous people’s contributions to the war effort was, of course, only part of the history. The Second World War has often been treated as a blip or aberration in Indigenous histories, a moment that brought together Indigenous and non-Indigenous people with a common purpose. A comprehensive, comparative and transnational history of Indigenous Second World War service necessitated placing the war within the settler colonial context: examining the war as part of an ongoing continuum of policies, practices and relations between Indigenous peoples and the state. These interactions would continue after the war, and both Indigenous and settler regimes would use war service to promote their own ends, be they self-determination or assimilation respectively.

The final book Indigenous Peoples and the Second World War reveals the constantly shifting negotiations that Indigenous people and settler society undertook during the war. These negotiations took place on both the micro (individual) and macro (state or Indigenous community) levels, and one key point we emphasise across the book is the diversity of experiences even within the dominant narratives of the war. Indigenous people in all four states were just as proactive as reactive and, as they had for centuries, aimed to secure the best outcomes for themselves, their families and their communities. In some instances this meant joining the armed forces; other people moved to cities to participate in the booming wartime economy; some Indigenous nations saw the war as an opportunity to reach out to settler states, offering the use of land or resources; while other nations resisted conscription and participation on the basis of treaties or sovereignty.

Just as we the historians look back at the war and keep asking ‘why?’, so too do Indigenous people of today see the importance of asking (and answering) such questions. There are political imperatives to showcase the extent of Indigenous contributions to the Second World War effort. War service can support agendas of reconciliation, fights for equality or assertions of sovereignty. Indigenous Peoples and the Second World War shows all of these intersecting, overlapping, contradicting and complicating sides of Second World War service. 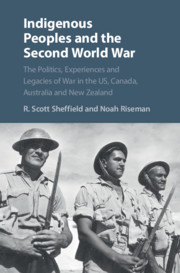 About the Author: Noah Riseman

Noah Riseman is Associate Professor of History at the Australian Catholic University. His first book, Defending Whose Country?: Indigenous Soldiers in the Pacific War (2012), was shortlisted for the 2013 Chief Minister's Northern Territory History Award....

About the Author: R. Scott Sheffield

R. Scott Sheffield is Associate Professor of History at the University of the Fraser Valley. He is the author of The Red Man's on the Warpath: The Image of the 'Indian' and the Second World War (2004)....