Human rights talk has obscured the devastating effects of counterterrorism

Since the dramatic events of September 11, 2001 which ushered in the “War on Terror”, there’s been a gradual change in how state officials, experts and international human rights advocates of various nationalities and political persuasions talk about counterterrorism. In the immediate post-9/11 days, it was common to hear United States and United Kingdom officials argue that the threat of terrorism was so exceptional it required and justified responses that were incompatible with established understandings of human rights standards. By 2006, the United Nations General Assembly would adopt a Global Counterterrorism Strategy that had the opposite premise, that is, that for counterterrorism to work, it had to comply with and be based on respect for human rights. It is this UN language of “respecting human rights while countering terrorism” that has become the dominant way of relating human rights to counterterrorism.

In my forthcoming book Human Rights-Complaint Counterterrorism: Myth-making and Reality in the Philippines and Indonesia, I look more closely into the idea of an alternative model of counterterrorism that is human right-compliant. I argued that this apparently progressive change in the way we talk about counterterrorism can serve purposes that retard rather than advance respect for human rights. In the first place, as many scholars have previously argued, the very concept of terrorism is highly problematic. Critics have pointed out the inherent double standard in the concept of terrorism that doesn’t cover the state and its deployment of violence but focuses only on non-state actors and their use of violence against the state. This allows a discourse of terrorism to be deployed by the state to escalate conflict rather than seek peace with adverse groups, with devastating effects on human rights, as I show has happened in the Philippines and Indonesia. Ironically, the idea of human rights-compliant counterterrorism perpetuates this concept of terrorism, helping portray state violence as fundamentally justified or justifiable while silencing the state’s adversaries. 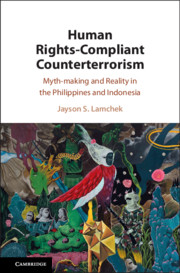 About the Author: Jayson S. Lamchek

Jayson S. Lamchek has worked as an attorney for civil society organisations in the Philippines for more than seven years, including the Public Interest Law Center which supported the peace negotiations between the Philippine government and the National Democratic Front of the Philippines. During his work at PILC, he helped campaign against the War ...