Emotional Worlds: Beyond an Anthropology of Emotion

My inaugural, ghost-written speech to the Niha – learned rote and recited to massed tribesmen over a bloody carpet of pigmeat – ended with the resonant phrase, There is no resentment! It took me a further year of gruelling fieldwork in Nias to work out what, in practice, ‘painful heart’ really meant and why it mattered so much. In an egalitarian society ordered by competitive feasting and gift exchange, envy and resentment are constant factors. Against the strutting one-upmanship of the feast, fear of ‘painful hearts’ spurs generosity to guests, allaying the risk of sorcery, reshuffling debts while spreading ‘love’. The gift is balm for the heart.

In the milder setting of Java, another Indonesian island, the ethnographic puzzle was to work out how emotions like ‘reluctance’, ‘shame’, and ‘feeling in or out of place’ functioned as the soft connecting tissue in a minimalist social structure with few rules or boundaries. Emotions, I slowly discovered, served as social antennae, monitors of decorum and inclusion, not expressions of inner feeling. In a close-packed, ideologically diverse community, they guaranteed the peace.

In neither place, Java or Nias, would Western psychology have been much help. European words for emotions found no simple equivalents. Nor was there an overarching category of ‘emotion’ of which ‘painful heart’ or ‘reluctance’ were instances. The conception of human functioning, the fabric of experience, the ethos, the fit of affect with social reality, were altogether different.

Such is the challenge of ethnography to Western psychology, which largely deals in universals and makes cultural differences secondary, the mere dress of Human Nature, as if our ‘love’ and ‘anger’ were not also cultural matters, like Japanese amae or Javanese amok. The underrating of culture in most emotion research happens to coincide with a neglect of naturally occurring emotions, seriously weakening claims to validity and descriptive realism. It’s a curious fact in the history of emotion studies that most analysis is based on lab experimentation, linguistic and conceptual analysis, or introspection. Very little stems from naturalistic observation. Which means that questions of how ‘real’ emotions are bounded, distinguished, and constituted, how they emerge in the flow of practice, what they mean and do, how and why they vary cross-culturally, cannot adequately be formulated, let alone resolved. Most approaches leave us with a sense that a great deal is being left out.

Given their concern with actual lives lived under diverse conditions, this ought to be an area ripe for investigation by anthropologists. Yet, surprisingly, emotions generally fall under the ethnographic radar. Either they are presumed to be biological universals or are deemed too ‘psychological’ for a study of religion, migration, or markets. With rare exceptions, ethnographies dedicated to emotion have tended to fall back on formal methods that shy away from natural emotions, turning the field into the lab or dragging the psychoanalytical couch into the jungle. Something essential goes missing. But what is it?

The argument I make in Emotional Worlds is that, emotionally speaking, the devil is truly in the detail. A recourse to generic emotive situations, stereotypical roles and linguistic clusters may indeed pull up common denominators and map out dimensions; but modelling drains an emotional episode of what makes it personally compelling and practically effectual. Unlike thoughts and opinions, which can be off-the-peg, emotions are tailor-made to the individual. Whatever their generic similarities as instances of ‘anger’ or ‘regret’, their motivation, force and expression – their handle on the world and their grip on us – depend intimately on circumstance and biography. My emotions are necessarily mine in a way that my ideas and values are not. Crucially for their empirical investigation, emotions are interwoven with dramas of everyday life, framing contexts, making sense within histories of relations that connect and define people. Emotions aren’t purely private affairs; they are observable and construable, though not at a distance, where those constitutive particulars disappear. Emotions only come fully into view up close and personal.

Emotions aren’t purely private affairs; they are observable and construable, though not at a distance, where those constitutive particulars disappear. Emotions only come fully into view up close and personal.

An account which respects the integrity of human experience must incorporate this level of particularity, not discard it as mere background. How can it be done? There is no skeleton key; emotions are too heterogeneous for that. But a narrative approach faithful to dramatic context opens many doors. Crucially, it takes account of the complex disputed past and the evolving ambiguous present: the temporal factors that frame emotions. A narrative approach not only recovers dimensions of emotional episodes that escape the analytical net but contributes to a humane and realistic ethnography, whatever the theme. For narrative takes us beyond a narrow ‘anthropology of emotion’. Through stories from five years of fieldwork in Indonesia, and case studies from the Arctic to the Amazon, Emotional Worlds explores the astonishing range of human experience, presenting a critique of standard approaches and beating a path back to emotional realism. 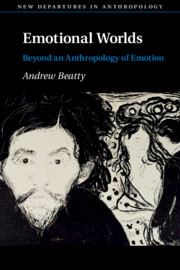 About the Author: Andrew Beatty

Andrew Beatty teaches anthropology at Brunel University. He has carried out five years' fieldwork in Indonesia and is the author of four other books, including After the Ancestors: An Anthropologist's Story (Cambridge, 2015)....