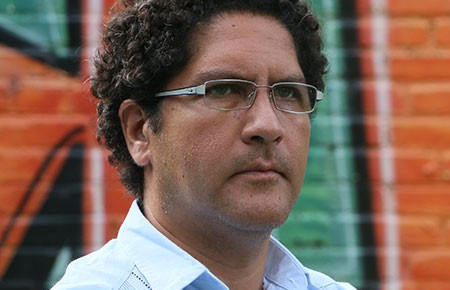 Since 2013, Alejandro has been professor of musicology and ethnomusicology at Cornell University’s Department of Music; before that, he was in the faculty of the Latino and Latin American Studies program of the University of Illinois at Chicago.

Alejandro is a cultural theorist whose historical, ethnographic, and critical work focuses on music and expressive culture from Latin America and Latinos in the United States. Working at the intersection of musicology, ethnomusicology, and performance studies, his work interrogates neoliberalism, globalization, and postmodernity while exploring questions of transnationalism, diaspora, and migration; homophobia and constructions of masculinity; embodied culture; and historiography, narrative, and alternative ways of knowledge production in music from the long twentieth century. Alejandro is the author of more than half a dozen books, for which he has received numerous awards, including the 2017 Dent Medal for “outstanding contributions to musicology”. He is also General Editor of Oxford University Press’s Currents in Latin American and Iberian Music series, and on the editorial board of the Latin American Music Review.

His arrival is warmly welcomed by co-editor Pauline Fairclough, professor of music at the University of Bristol. Pauline is a cultural historian, specialising in Soviet music and the music of Dmitri Shostakovich. Author of numerous books, and co-editor of Twentieth-Century Music since 2018, she is also an elected Vice-President of the Royal Musical Association, General Editor of Routledge’s Russian and East European Music series, and on the editorial board of the Moscow journal Iskusstvo muzïki. Teoriya i istoriya (The Art of Music. Theory and History).

As co-editors of Twentieth-Century Music, Alejandro and Pauline are looking forward to sustaining the journal’s commitment to high-quality research on a broad spectrum of scholarly interest in the long twentieth century. They welcome submissions on all kinds of musical practice, including folk and popular music, media and film music, as well as art music and sound art. Pauline and Alejandro also encourage submissions from a wide variety of methodological and disciplinary perspectives, including ethnomusicology, archival research, cultural studies, and analytical work which engages with broad historical arguments.

Cambridge University Press extends its deep gratitude to Jason Stanyek at the University of Oxford, who stepped down from co-editing the journal in December 2018, for his editorial leadership, commitment, and bonhomie.

About the Author: Holly Buttimore