Africa’s Precolonial History: A Decentered View on the Kongo Kingdom

The ancient Kongo kingdom in West-Central Africa has attracted much attention. Usually the study of its history starts with the arrival of Portuguese navigators at the end of the fifteenth century in the Africa’s Atlantic Coast region. But what can be said about the kingdom’s origins and early history?

From 2012 to 2016, the KongoKing research team, led by Professor Koen Bostoen of Ghent University (UGent) in Belgium and financed by the European Research Council and the UGent Research Fund, aimed at studying precisely that all-important early period. The focus of most historical research had been on written documents that highlight the exchange between the central authorities of the Kongo kingdom and the Portuguese. The KongoKing team used a cross-disciplinary method, integrating new evidence from Archaeology and Linguistics with written sources. The new evidence gathered during the project pointed out that language expansion and political centralisation did not coincide in this part of Central Africa, leading to new conclusions about the shifting political borders of the Kongo kingdom. The spread of the Kikongo Language Cluster from the inland area around present-day Kinshasa and Brazzaville towards the Atlantic Coast happened at least a thousand years before the rise of the Kongo kingdom. It was linked to the early expansion of Bantu-speaking village communities in the Lower Congo Region.

Furthermore, the archaeological evidence on the Kongo Kingdom was gathered from the provinces, rather than the central capital of the ancient kingdom as usually had been the case so far, with as a consequence fascinating insights into the spread of its cosmopolitan culture into the interior of Africa.

This decentred view on the Kongo kingdom was combined with insights of long-standing international experts in the field from the disciplines of Art History, History and Anthropology. The unique interaction led to the new edition with 11 chapters, 322 pages, maps, tables, colour plates, a reference list and index.

In the book, the reader encounters a wide range of themes: clans and political power, borders and rivers, funerary rituals, decorated ceramics and pipe-smoking, book cultures and unique Bantu language from the 17th century, etc. These themes are interesting as such, while they at the same time lead to conclusions about elite formation, internal political dynamics, Kongo Christianity, cosmopolitan culture, and other wider processes.

The launch of the book on December 5th at Ghent University was a festive occasion that added yet another perspective on the Kongo kingdom: the literary voice of the award-wining writer Wilfried N’Sondé, who in his novel Un océan, deux mers, trois continents (2018) tells the story of the Kongo ambassador Dom Antonio Manuel travelling to the Vatican between 1604 and 1608. We enjoyed exchanging on our mutual interest in Africa’s precolonial history. 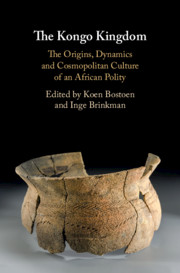 About the Author: Koen Bostoen

Koen Bostoen is Professor of African Linguistics and Swahili at Ghent University. His research focuses on the study of Bantu languages and interdisciplinary approaches to the African past. He obtained an ERC Starting Grant for the KongoKing project (2012–16) and an ERC Consolidator's Grant for the BantuFirst project (2018–22). He is author of D...

About the Author: Inge Brinkman

Inge Brinkman is Professor of African Studies at Universiteit Gent, Belgium. Her research crosscuts the fields of African literature, popular culture and history with a focus on Kenya and Angola. For her Ph.D. dissertation at Leiden University, she examined literature, identity and gender in Central Kenya. During a post-doctoral project at Cologne ...