Accelerated Times? From The Romans in Britain (1980) to the Millennium Bug

‘Have you ever been in a car crash? Unfortunately, unlike the car crash, time will not slow down for us. If anything, we’re accelerating toward disaster’[1]

It was the question of whether or not an erect penis was seen on stage that marked, in many respects, where this period began. The transition from the furore surrounding the staging of Howard Brenton’s play The Romans in Britain (1980) to the hysteria of the Millennium Bug is one characterised by accelerated social, political and technological change.

Accelerated Times: British Literature in Transition, 1980-2000 traces a shift from a Britain where arch-conservative activist Mary Whitehouse was able to pursue a criminal case of gross indecency against a theatre director, to a country that was under the spell of mercurial New Labour and Cool Britannia. Our book seeks to read and understand the competing discourses of politics, culture, technology and nation while positioning literature as both within and of them.

The volume traces the dialogues between changes in conceptions of society and selfhood, on the one hand, and literary representation, on the other, in order to reveal the discursive symbiosis of life and art during the period. Accelerated Times is structured in four overlapping sections – ‘Transitions’, ‘Nation’, ‘Society’ and ‘Acceleration’ – although the process and experience of acceleration is of course present throughout the entire volume.

The book examines exactly how this sense of speed emerged at the end of the 20th century, in essays examining changing attitudes to class, nationhood, religion, sexuality and ethnic difference, and how in combination, these complex, adjacent discourses evoke an acute motion sickness in the literature.

The shift towards acceleration in all arenas of public and political life is palpable in even the briefest of surveys of the historical events that mark the post-1980 period. It was driven, for example, by the escalating sectarian conflict in Northern Ireland – including the hunger strike of Bobby Sands, who died in 1981 – and the Provisional IRA Brighton bombing that followed three years later in 1984, which was intended to assassinate Prime Minister Margaret Thatcher. The HIV/AIDS crisis began to take hold in the early 1980s, with AIDS being first clinically observed in the United States in 1981. The Landmark Aids Centre in south-east London, offering support and treatment to AIDS patients, was opened by Princess Diana in 1989.[2] The advent and dizzying development of the World Wide Web, conceived in the same year and subsequently launched in 1990, unleashed an unprecedented acceleration in both personal and professional communication that continues to greatly affect life post-millennium.

These tail-end decades were also the era of the so-called ‘Sus’ Laws. The informal name given to the stop-and-search laws that almost exclusively targeted non-white British citizens in the 1980s, as written about by UK-based Jamaican dub poet Linton Kwesi Johnson. Accelerated Times also considers the race riots that such racial profiling by the police engendered in deprived communities across Britain, including London’s Brixton and Liverpool’s Toxteth, among others. It explores the extent to which this dubious starting point allowed for a fostering of ‘multiculturalism’ in the 1990s, or whether the largely hidden history of this violence continued to hamper and tragically sabotage it. These legacies of inequality remain very much with us to this day. 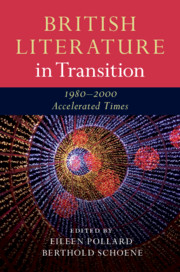 About the Author: Berthold Schoene

Berthold Schoene is Professor of English and Faculty Head of Research and Knowledge Exchange for Arts and Humanities at Manchester Metropolitan University. His books include The Making of Orcadia (1995), Writing Men (2000), Posting the Male (2003), The Edinburgh Companion to Contemporary Scottish Literature (2007), The Cosmopolitan Novel (2009) and...

About the Author: Eileen Pollard

Eileen Pollard is Senior Lecturer in English at the University of Chester. Her interview with Hilary Mantel was published by Textual Practice in 2015 and she is co-editor of the forthcoming collection of essays Hilary Mantel: Contemporary Critical Perspectives....