Poetry and the Centenary of the First World War

When we first began to write about the poetry of the First World War, this current centenary lay some years ahead, and was only vaguely in our minds as a publishing end point. At the same time, the approach of the centenary made us think differently, perhaps think more clearly, about how we would write about both the poetry written during the war, and poetry written afterwards, reflecting back on it. In fact, the initial focus of our work was on later twentieth century poetic responses to the war. Distanced ourselves, historically at least, from the conflict, perhaps we found a readier understanding of poetry that was also at a remove. We looked at Seamus Heaney’s ‘In Memoriam Francis Ledwidge’, a poem about a memorial to the First World War dead in a small town in Northern Ireland, but thus the site of intense cultural and historical counter-currents. Heaney addresses the poet Francis Ledwidge, an Irish Catholic who fought for the Allies and was killed by a shell in 1917:

In you, our dead enigma, all the strains

Heaney’s poem led us outwards from the First World War to other poems about stone memorials to the dead of both earlier and later conflicts – Robert Lowell’s ‘For the Union Dead’ and Yusef Komunyakaa’s ‘Facing It’ (about the Vietnam Veterans memorial).

But these poems in turn led us back to face the poems from the First World War itself. Many of those poems are endlessly familiar; but we tried to look at them afresh and bring them to fresh life for an audience revisiting this painful and cataclysmic conflict, one hundred years on. It was at this point that we began to focus our attention on the way that these poems acted specifically as a means of remembering the dead. The later poems about memorials (and those about photographs of those who fought in the war, which we also discuss) are evidently about remembering. But we wanted to look at the way poets writing in the thick of action, surrounded by death and in fear of imminent death, were, in the immediacy of writing, beginning the process of commemoration.

As we looked at the body of First World War poetry, we saw how poets looked hard at the act of dying, dead bodies, and death itself. Combatant poets were especially well qualified to do that, with the added dimension of the ubiquity of death which constantly threatened their own existence. But non-combatant poets also grappled with this understanding – men and women, at home or, as in the case of nurses or stretcher-bearers, close to the action, added their imaginative understanding. We wanted to give as broad a representation as possible, whilst always homing in on the central subject – how the dead were remembered. So we look at well-known poets (Rupert Brooke, Wilfred Owen, Isaac Rosenberg, Siegfried Sassoon) alongside lesser known poets (Mary Borden, Wilfrid Gibson, Ivor Gurney, Charlotte Mew, Arthur Graeme West), and we hope that in so doing we unsettle standard perspectives on the familiar, whilst introducing readers to the less familiar.

The poetry itself is at the heart of the book. It speaks of a conflict long gone, yet still present; it speaks of and for those who died; and it speaks for itself. 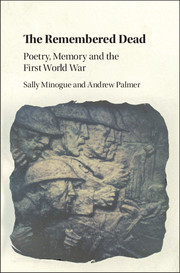 The Remembered Dead: Poetry, Memory and the First World War is by Sally Minogue and Andrew Palmer.

Read a free chapter from The Remembered Dead as part of our special free collection to commemorate 100 years since Armistice Day 1919.

About the Author: Sally Minogue

Sally Minogue is a retired academic who is still writing. She has taught in both further and higher education. On retirement she was Principal Lecturer in English Literature at Canterbury Christ Church University. Her research interests have been eclectic, stretching from Philip Sidney's poetry to Alan Sillitoe's fiction. A common theme has been an...

About the Author: Andrew Palmer

Andrew Palmer is Principal Lecturer in Modern Literature at Canterbury Christ Church University, where he has taught since 1996. He holds a D.Phil. from the University of Sussex and is a Senior Fellow of the Higher Education Academy. His teaching and research are focused on the literature of the twentieth century. With Sally Minogue, he has publish...