Dr. Who and Nero 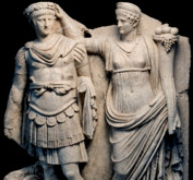 John F. Drinkwater looks back at his lifelong fascination in Roman History and the personal conclusions about Nero he has drawn.

My interest in Roman history began before I could read, thanks to a wonderful picture-book on the Romans given to me as a Christmas present around 1950.  However, an early episode of Dr Who had an almost equally strong impact.

I have been a fan of the series from its start in 1963, and in early 1965 was particularly struck by its four-episode serial ‘The Romans’, with William Hartnell as the Doctor and Derek Francis playing Nero to the hilt as the ‘mad, bad and dangerous to know’ autocrat of the ancient sources and modern novels, films and TV dramas.

I remember thinking that this couldn’t possibly be true:  that the Roman Empire could not have survived under such a monster and that we would soon be introduced to other characters running things successfully behind the scenes.

But, of course, this did not happen.  Francis’ standard ‘wicked’ Nero, having planned to kill the Doctor, goes on to burn down Rome (https://youtu.be/J6eVk0x-9lY).

I became a university teacher of Roman history, focusing on the Late Empire.  In 2007, however, after publishing my Alamanni and Rome I decided to take a short break and attempt something different by writing an introductory analysis of the ‘office of emperor’ in the first-century AD.

My plan was to catalogue the chief characteristics of the position and then illustrate these with examples from the activities of particular emperors. Having roughed out a working list of characteristics I moved to find examples and began with Nero.

Almost immediately I discovered that I could identify few of my characteristics in his reign.  Also, used to the many disasters of late imperial history, I was impressed  by how successful this reign was, despite its dismal reputation and violent end.  l therefore concluded that Nero’s rule could not have been as bad as it has been painted and decided to examine Nero’s principate in its own right.

What I had planned as a short break from the Late Empire lasted over ten years and resulted in my latest book, Nero. Emperor and Court.  I enjoyed every minute of it, and was especially gratified to discover the many strands of modern research – literary, historical, artistic, architectural, economic – that were already indicating a different Nero:  personally culpable, but never evil or mad, and certainly never a threat to the immense strength of the Empire.

My main conclusions are that Nero never ruled alone, and that those who counselled him and, indeed, often acted in his name, were men and woman of great ability and, at times, courage.  This argument owes much to my work on the Late Empire, during which there was always a range of political actors comprising, for example, multiple emperors and heirs,  wives, sisters, eunuchs, generals, bishops and holy men.  But I’m sure that it also derives from my unforgettable ‘Whovian’ intuition of 1965.

About the Author: John F. Drinkwater

John F. Drinkwater is Emeritus Professor of Roman Imperial History at the University of Nottingham. He has been joint editor of the Derbyshire Archaeological Journal and is now also honorary lecturer in Archaeology at the University of Sheffield. He has been elected a Fellow of the Society of Antiquaries of London. His principal field of research i...