The British Army and the First World War

Innovation is big business. Whether we’re talking about blue chip companies like Apple, multinationals like Google, or the Defence community, the ability to innovate is associated with greater competitive advantage and versatility. Yet, for the military, in an era marked by tightening budgets, constant confrontation, and the blurred distinction between war and peace, armed forces have embraced innovation as the means through which military advantage can be maintained and enhanced. As one senior British officer remarked, ‘Innovation … is the way we respond to the new threat environment. We need to be more creative, take more risk, and focus on output’. Yet, innovation isn’t just a twenty-first century concern. Whether we’re studying Antioch, Antietam, or Alamein, the need to think creatively, to exploit new opportunities, and to innovate quicker than an adversary are enduring and timeless requirements.

One hundred years ago, the British Army was thinking creatively, exploiting new opportunities, and attempting to win the innovation game against its adversaries in the First World War. On the battlefields of the Western Front, Italy, Mesopotamia (modern day Iraq), Palestine, and Salonika, the army was using and developing cutting edge technology. It was combining different arms: artillery, infantry, aeroplanes, and tanks all working in concert. It was drawing on the world of ‘big business’, employing managers of large companies to help improve its efficiency.

We don’t tend to hear much about this story of the British Army’s experience of the First World War, and that’s because it butts up against popular narratives associated with the conflict. It doesn’t support the overarching perception of glaring incompetence: of over-promoted generals with little appetite for change, of the seemingly predictable nature of the same tactics used over again, resulting in the mass casualties of the Somme and Passchendaele. I wrote Learning to Fight because I felt that those narratives oversimplified the challenges that the army faced during the First World War. They overlook the difficulties of fighting in multiple theatres; of transforming citizens into soldiers; of trying to defeat a variety of tenacious adversaries in a lethally competitive environment. Learning to Fight is not an attempt to whitewash the army’s performance in the war. Instead, it charts a messy process of learning and change, which was marked by risk, pragmatism, failure, as well as success.

Throughout the centenary of the war, the British armed forces of today have looked back at the experience of their forbearers. Military practitioners are reaching back to the First World War as a possible source of lessons for the future: how to rapidly mobilise and deploy the army, how to grow or ‘regenerate’ the force, and how to make the most of civilian expertise as a way of bringing in fresh ideas and talent. “I am struck by just how much innovation there was a hundred years ago,” remarked the former British Chief of the Defence Staff, “[i]t was very much about innovation on the battlefield and achieved a remarkable effect”. 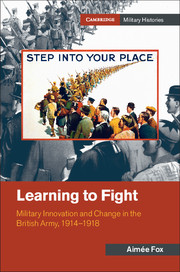 Learning to Fight by Aimée Fox is now available from Cambridge University Press.

About the Author: Aimée Fox

Aimée Fox is a Lecturer in Defence Studies at King's College London. Her research interests centre on organisational learning, change and administration in the British army of the First World War....