Mutiny and the British Pacific

I can still remember the first time I heard about Pitcairn Island. I was a young child, not even a teenager, when I found an old Book Club edition of Nordhoff and Hall’s fictional trilogy detailing the mutiny aboard the Bounty, Captain Bligh’s open-boat ordeal at sea, and the settlement and early history of Pitcairn Island on a bookshelf at my grandparents’ house is rural Tennessee.

These are swashbuckling novels, and my day-dreaming pre-teen mind was hooked.

Perhaps I’ve not fully grown up, for Pitcairn Island still calls to me, even now that I’m an academic historian of the British Empire, a published author, and a college professor. Maybe, deep down, there’s still a star-eyed part of me with delusional dreams of a life at sea. And, maybe, it’s that part of me that felt drawn to this island professionally.

In fact, though, Pitcairn does stand out in the history of British imperialism more broadly. It is one of only a handful of places that are still British colonial possessions to this day – the odd bit of colonialism in an otherwise post-colonial world. That’s where this book started. It was to have been a book about the history of those parts of the British Empire that either did not or failed to de-colonize. Pitcairn Island was to have been but one small chapter in this larger book, but then, well, the island seems to have mutinied against me.

In book after book about the Bounty mutiny and the history of Pitcairn, authors made a quick and passing reference to Joshua Hill, a fraudster who appeared at Pitcairn in the 1830s, pretended to have authority to govern the island, and was allowed to govern for a time before he was exposed and expelled. End of story. Always quick, always passing, always abrupt, and, to my mind, always interesting.

Who was this man? Why had he attempted to gain control over one of the most isolated islands in the world? Why had the islanders allowed him to govern them, particularly, as they seem to have known he was telling tales right from the very beginning?

These seemed like obvious questions to me, but nobody had ever really ventured to ask them. Nobody had ever tried to answer them. There was a story to be told, an adventure to be had.

The Pretender of Pitcairn Island: Joshua W. Hill, the Man Who Would Be King Among the Bounty Mutineers is my attempt to answer some of the questions I had about Hill’s idiosyncratic reign at Pitcairn Island. But, it turned out to be more than that. For, by choosing to follow the historical trickster down his rabbit-like hole of lies and deceptions, I found that, like Alice before me, a new and bigger world opened before my eyes.

Joshua Hill’s story did not just take place at Pitcairn Island. His was a global journey through the nineteenth-century Pacific World. His Pacific stretched from Parish to Colonial North America, from South America to Tahiti, from Honolulu to India, and back and forth between Liverpool and London. As he triangulated this global web, Joshua Hill’s stop at Pitcairn Island was not a marginal piece of nineteenth-century history. Rather, he carried with him a global vision of British power that required a new way of thinking about the Pacific broadly and Pitcairn Island specifically.

Taking this strange moment and this “man-who-would-be-king” story seriously, then, helps us reshape what we know about nineteenth-century British imperial history and about British power in the Pacific in particular. This is a story that reminds us that even the tiniest pieces of empire, though so often overlooked in the grander scheme of things, have stories to tell us that can reshape what we know about the rest of the globe. 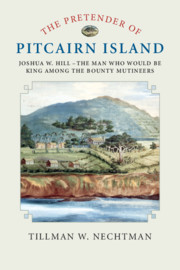 The Pretender of Pitcairn Island: Joshua W. Hill, the Man Who Would Be King Among the Bounty Mutineers is now available from Cambridge University Press

About the Author: Tillman W. Nechtman

Tillman W. Nechtman is Professor and Chair of the Department of History at Skidmore College, New York. He writes extensively on the British Empire in the eighteenth and nineteenth centuries, and his previous works include Nabobs: Identity and Empire in Eighteenth-Century Britain (Cambridge, 2010)....