An Environmental History of India

The current global environmental crisis increasingly affects us all.  Efforts to mitigate and adapt ourselves to its effects must vitally engage all nations and all people.

Yet, the pressing and immediate features of our time have deep roots in the long history of human interactions with the world around us, both animate and inanimate.  Further, attitudes toward, and relationships with, the environment have always varied so much among diverse societies in different parts of the world.  Looking at how specific societies have over time articulated their material and cultural relationships with the natural world can thus provide crucial insights into our present condition and also shape our most effective policies of mitigation and adaptation.

The Indian subcontinent (presently primarily the nations of India, Pakistan, and Bangladesh) stands as one of the world’s regions that is richest and deepest in its environmental history.  The major world religions of Buddhism and Hinduism emerged there, as did the deeply non-violent Jain religion.  South Asia has also had substantial Muslim and Christian communities.  Each of these traditions and communities has historically expressed and implemented its own distinctive relationships with the environment.  Further, India’s complex political history, including some of the world’s earliest empires and longest-standing regional states, also displays a range of efforts and means of affecting the material world.

For example, devout Buddhists venerate the many earlier births of Gautama (c.560-c.480 BCE), before he achieved enlightenment as the Buddha.  Born as a series of animals, he expressed and enacted the emerging Truth of non-violence and the Middle Way between extreme asceticism and extreme pleasure.  His followers, including Emperor Ashoka (r.268-31 BCE), then committed themselves to applying these lessons in their relationships to fauna and flora.  For many environmentalists today, both the Buddha and Emperor Ashoka remain role models.

Another exemplary Indian is Mohandas “Mahatma” Gandhi (1869-1948).  He drew upon, combined, and advanced the non-violent and social reform traditions of India and Euro-America, particularly in his struggles against British capitalist-driven imperialism in South Africa and India.  He practiced and perfected a life of complete economy (from the same root at “ecology”).  Many of today’s environmentalists find models and inspiration in Gandhi’s life and deeds.  Yet, a close reading of Gandhi’s own words complicate his attitudes and relationship with the natural world.

Today’s nations of India, Pakistan, and Bangladesh are particularly vulnerable to climate change, which has resulted far less from their actions than from those of the long-developed and long-polluting West.  Further, these relatively new nations, but ancient societies, are causing–and having to suffer the consequences of–severe degradation of their material, faunal, and floral environments.  As developing economies, they require vast and increasing resources and the scope to increase their carbon emissions.  Yet, sea-level rise, increasing temperatures, and extreme weather events all will especially affect their 1.5 billion citizens.  Only by engaging all parts of their diverse societies and incorporating their several cultural traditions will these nations adapt and become more resilient to today’s environmental changes and challenges. 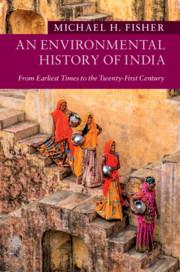 Michael H. Fisher’s An Environmental History of India: From Earliest Times to the Twenty-First Century is now available from Cambridge University Press.

About the Author: Michael H. Fisher

Michael H. Fisher is Danforth Professor of History, Emeritus, at Oberlin College, Ohio. He is the author of numerous books, including Migration: A World History (2013) and A Short History of the Mughal Empire (2015)....