Like so much else in life, this collection began by accident. I had been working for some years on a book about terrorism and unspeakability (now forthcoming from Routledge) when I had a conversation with Ray Ryan about it. A few weeks later, Ray emailed me to ask if I would take on editing a collection on terrorism for his new, ‘Cambridge Critical Concepts’ series. When an editor at Cambridge University Press asks you to do something, you say yes! And so I did, and Terrorism and Literature is the result!

To state the obvious, terrorism is an overwhelming presence in contemporary politics. There are few conflicts, both present and past, that do not involve terrorism in one way or another, and literary people have embraced the topic. From the term’s inception in the eighteenth century, novelists, poets, and film directors have confronted terrorism. And yet, until 9/11, very few literary critics thought the topic worth analyzing. Strangely, the first book on terrorism in literature was published as late as 1985, even though such major authors as Doestoevsky, Henry James, and Joseph Conrad made terrorism central to several of their novels. Due to 9/11, critical interest in the topic soared, but the books and articles on the topic were strangely blinkered in their approach, focusing only on one era, sometimes only one author, never trying to see terrorism and literature in a broader perspective. So that’s what I tried to do in Terrorism and Literature.

My hope is that people both inside and outside literary critical circles will look at this book and realize the degree to which terrorism is a massive and complicated topic.

Since terrorism’s definition and its origin are both highly contested, I decided to devote the first section to history, letting each contributor define terrorism however they may. The book begins with an essay on terror and the Abrahamic religions, then moves to essays on the early modern period, the French Revolution, nineteenth century Ireland and Britain, nineteenth century Canada, then India, the Troubles, 1970s Europe, and the Middle East. The point is to give readers the historical contexts necessary for understanding the literature. The next section moves to literature (broadly construed), and we have essays that range from the early modern period, Gothic novels, films (e.g., The Battle of Algiers), the Arab-Israeli conflict, Albert Camus, 9/11 novels, and literary theory. The third and final section looks at how literature of today, and possibly of the future, deals with terrorism. Again, the essays cast a wide net, and range from Don DeLillo, to post-9/11 American poetry, to how the Samson legend fares in John Milton and a contemporary production of Handel’s opera on the same.

My hope is that people both inside and outside literary critical circles will look at this book and realize the degree to which terrorism is a massive and complicated topic. Almost everything about it is unsettled, from the definition to whether it’s ethical for writers to deal with the topic. How much imaginative sympathy can we give to people who throw bombs into crowded public spaces? Given literature’s ability to create sympathetic portraits of evil people (ranging from Satan to Walter White, Tony Soprano, and most recently, Logan Roy), why does the creative imagination have such difficulty with terrorists? These are all questions Terrorism and Literature confronts, if not precisely answers. Despite the book’s size, I’m painfully aware of just how much has been left out, how many voices have gone unrecognized. My hope is that the absences will spur people to do their own work on the topic. Until then, here’s hoping you read the book and find something worthwhile in the essays. 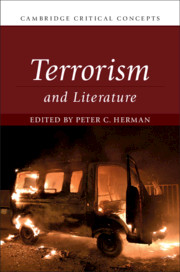 Terrorism and Literature is part of our Cambridge Critical Concepts series and is edited by Peter C. Herman

About the Author: Peter C. Herman