The opera house is one of the most successful new building types of modern times. Found all over the world, opera houses usually have three major features: private boxes stacked vertically around an open, central space; an orchestra pit; and a deep stage to hold elaborate scenery. Each of these features has its own history. The theater box first appeared in Venice in 1580, when two theaters opened at carnival season for the performance of comedies — opera had not yet been invented. In watery Venice, where dry land has always been at a premium, the audience could be accommodated vertically to produce more revenue for impressarios out to make a ducat, or for the troupes of travelling commedia dell’arte players who depended on paying audiences for their livelihood. In sixteenth century Italy, for reasons of propriety, men and women were not allowed to sit next to each other in theaters. The box solved that problem for families. Husband and wife, often with their children, could sit side by side in an extension of the family’s domestic space. These theaters created a novel social situation: men and women could not be seated together in a public space without causing a scandal. Or so one might think. Venetians quickly figured out that a box could become the equivalent of a modern motel room, a situation that scandalized the straight-laced old men who ran the government. In 1585 they ordered the destruction of both theaters. They feared that if such an immoral situation were to continue, the Almighty would strike down Venice as He had destroyed Sodom and Gomorrah.

The earliest known orchestra pit dates from 1621, when it was constructed as part of a temporary theater created for the celebration of a ducal wedding in Pesaro. Previously instrumentalists were generally placed behind scenery, where they were invisible to the audience and, problematically, both to each other and the singers out front. On stage there was a musical performance — not necessarily an opera — staged with the lavish scenery and costumes typical of theatrical performances at Italian courts that were part of dynastic celebrations. The scenery itself was illusionistic, based on one-point perspective that had been used by renaissance painters since the 1420s to create a visual sense of actual depth, first on a two-dimensional surface and later on a three-dimensional stage. The opera house fused these diverse elements from commercial and court theaters to create an architectural hybrid to house a new art form, opera, that was in itself a hybrid of drama, music, visual arts and dance.

Opera began in the years around 1600 in Florence and Mantua. At first it was an entertainment for wealthy, well-educated Florentines or the ducal court of Mantua. The first public performance of an opera for a paying audience took place in mercantile Venice in 1637 in a rebuilt version of one of the destroyed comedy theaters with boxes of 1580. Opera in Venice was such a success that within a few years of the first performance five theaters simultaneously presented operas during carnival season. The first theater purposely built as a commercial opera house opened in Venice in 1639. From there the type spread down the Italian boot, north over the Alps, even into the Amazon Basin and, in recent times, to Guangzhou, China, in Zaha Hadid’s astoundingly beautiful opera theater.

Inventing the Opera House by Eugene J. Johnson is now out from Cambridge University Press 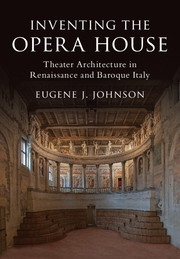 About the Author: Eugene J. Johnson