The Invention of Rare Books

The Invention of Rare Books

David McKitterick examines, for the first time, the development of the idea of rare books, and why they matter.

As a term, ‘rare books’ is bandied about so frequently that it cannot be said to be very precise: anything from the merely unusual to the unfamiliar to the unique. It is a convenient portmanteau term, whether for journalists, the book trade, librarians, book collectors or historians of the book more generally. For book buyers, it can have a kind of magnetic attraction, as booksellers well know. For librarians, it is a useful way of organizing books and readers. But where did the term come from, and how has it come to carry so many meanings?

Perhaps not surprisingly, it began to emerge in the late sixteenth century, the same period when the world was increasingly aware of the huge numbers of printed books that had come into circulation over the course of a hundred and more years. Their sheer numbers could seem alarming. How were all these books to be managed? How were people to find out what was available to buy – and, by implication, what could not be found? Within university and other institutional libraries, manuscripts were obviously rare, but what about printed books? Rarity was clearly not the same as price, for it was soon realized that small books were more likely to disappear than very large ones, and some books formerly immensely popular, printed in large numbers, could easily become scarce.

The tale is as complicated as the concept is confused. Much of it can be followed through booksellers’ and auctioneers’ catalogues. In the late seventeenth century, books printed by William Caxton could be had for a few shillings, and did not necessarily sell quickly. A little over a century later they were fought over at auctions by people with deep pockets. The Gutenberg Bible, now a mainstay of any discussion about rarity, was not recognized as the first major printed book until the mid-eighteenth century. Time and again, booksellers and collectors alike tended to look over their shoulders at the past, where there seemed to be so many more interesting books for sale. This sounds familiar today. But by the early nineteenth century the political and religious upheavals in mainland Europe brought into the market unimagined bibliographical wealth from private and institutional libraries. The centre shifted from France, so long dominant, to Britain. This country’s financial strength meant that bibliophiles and booksellers could dominate the trade in what were increasingly well defined as rare books.

So, too, did responsibilities shift, from individuals to national bodies, from private to public money. Printed books became ever more obviously a part of public, shared, memory. If anything, the concept of rarity became even more complicated, but by the mid-nineteenth century most of the features of the word, and the ways in which it was deployed, were established in ways that we recognize today.

The Invention of Rare Books by David McKitterick is available from July, 2018 from Cambridge University Press. 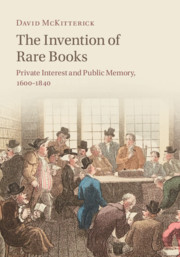 About the Author: David McKitterick