This Earth Day 2018, the next generation of conservation needs to embrace another type of science

Written by: Will Allen & Kent Messer

In nearly every article about Earth Day, whether it is about water scarcity in South Africa or algal blooms in Great Lakes, the same traditional message is underscored: embrace environmental science and change wasteful and polluting behavior. This message is fine, but frankly it is not enough.  The next generation of conservation need to strike a second tone.  Environmental leaders should embrace techniques and discoveries that underlie the science of strategic conservation and change from inefficient methods for targeting expensive conservation projects that sometimes do not make much of a difference to proven techniques that can get “a bigger bang for the buck.”

Conservation has a rich and proud history in the US.

Yosemite was protected in 1872 and our national park system has protected unique natural wonders, such Yellowstone National Park and the Grand Canyon. The funders of conservation—primarily government agencies and non-profit foundations—have historically focused exclusively on the ecological or scenic benefits of a project and ignored the costs of protection.  This one-sided approach may have made sense in the early days of conservation, but today this approach is no longer environmentally-friendly.  It often wastes funds, often from tax-payers, that could have been used for additional preservation.

In reality, few unique, crown-jewel conservation projects remain. Conservation today focuses on preventing excess nutrients from fertilizers running off farm fields, protecting local open space, preserving agricultural lands, and protecting clean water, clean air, and the natural processes from which all life depends.  Conservation funders now must decide where to invest their limited funds among a large number of high-quality projects, which have close ‘substitutes’ with regards to public benefits they can provide.  In other words, multiple projects can deliver the same type of environmental benefits, yet the cost of these projects can vary widely depending on the market.

To put it into another context, funders of conservation are like naïve shoppers who select wine solely on the taste ratings from the Wine Spectator. By ignoring the costs of their purchases, they get to the checkout counter only to wonder why their basket has so few bottles and they have no money left in their wallets.

However, why conservation funders have been reluctant to adopt this science-based approach remains a bit of a mystery.

Baltimore County’s Agricultural Land Preservation Program in Maryland is an exception that illustrates what could be.  Baltimore County tapped the tools of strategic conservation to choose which agricultural lands to save. In the first three years, Baltimore County was able to protect an additional 680 acres for the same amount of funds that would otherwise have been spent.  That translated into a savings of approximately $5.4 million, amounting to a return on investment of more than 60 to 1.   In other words, for every taxpayer dollar Baltimore County spent using its optimization model, it gained more than $60 in conservation benefits.

As budgets continue to be tight, funders of conservation need to follow the evidence from strategic conservation and change their selection techniques to ensure they spend other people’s money as wisely as they would their own. 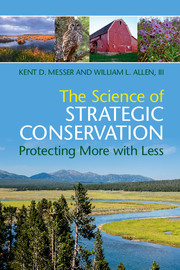 The Science of Strategic Conservation

About the Author: Will Allen

About the Author: Kent Messer