About the Cambridge University Press Bookshop

Cambridge University Press Bookshop opened in 1992, but the shop itself has been around for a great deal longer and selling books all the while; since 1581, in fact. Passing from hand to hand over the centuries, 1 Trinity Street was taken over in 1846 by Daniel and Alexander Macmillan who employed their nephew, Robert Bowes, as an apprentice. He would later become partner and eventually take on the premises. The shop remained Bowes & Bowes until 1986 when it became Sherratt & Hughes before Cambridge University Press took it on in 1992. We are still going strong today, showcasing around 50,000 different titles in the shop. In 2008, we expanded round the corner into 27 Market Hill where we opened our specialist Education and English Language Teaching shop the following year. We are proud to continue the fine old tradition of selling books here and contributing our bit to the fine history of 1 Trinity Street.

The theme of International Women’s Day this year is #PressforProgress. We have recently been celebrating the centenary of some women being granted the right to vote in the UK parliamentary elections, so it’s a chance to revisit this and to reflect briefly on how far we have come and where the pressure for equality continues today.

In 1908, in New York City, 15,000 women marched, demanding shorter hours, better pay, and the right to vote. The following year, the US observed the first National Women’s Day on February 28th. In 1910 the first IWD was proposed in Copenhagen by Clara Zetkin of Germany’s Social Democratic Party and was honoured in Austria, Denmark, Germany and Switzerland on March 19th 1911. More than one million people attended these rallies, campaigning for women’s rights to work, vote, be trained, to hold public office and end discrimination. In 1913, it was confirmed that March 8th would henceforth be the official date of IWD and there was a famous London rally the following year which saw the arrest of campaigner Sylvia Pankhurst and her launch of the paper The Woman’s Dreadnought: “The name of our paper, the Woman’s Dreadnought, is symbolic of the fact that the women who are fighting for freedom must fear nothing” (extract from the first issue, 21st March 1914).

It wasn’t until 1975 that International Women’s Day was celebrated for the first time by the United Nations, but it is testament to the importance of the celebration and its message of gender parity that it has remained one of the most widely-observed and politically-active days across the planet.

In a newly-published book, The Logics of Gender Justice: State Action on 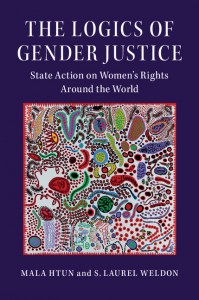 Women’s Rights Around the World, Mala Htun and S. Laurel Weldon take 1975 as their starting point to compare government responses to women’s rights issues across the world. They examine how different issues trigger different responses; for example, family law, abortion and contraception in states with strong doctrinal politics borne of ingrained religious predominance, or parental leave and childcare in areas where the political Left is stronger or the overall economic conditions are a central voter concern.

“In Norway and Sweden, parents of young children are entitled to thirteen months of paid parental leave, two months of which is typically taken by men. In the United States, federal law does not guarantee any paid leave, mandating only that firms of a certain size allow workers to take twelve weeks of unpaid leave. In Egypt and Jordan, family laws stipulate that men are in charge of the household and other family members must follow their will, while in Cuba, the family code implores men to do their share of the housework. In Catholic Ireland, abortion is a crime, while in Italy, seat of the Vatican, access to abortion is legally guaranteed and provided at state expense.” (p.1)

It’s a really interesting approach to understanding the complex pathways that are taken as societies press for progress. The diversity of religion and class, as well as historical, cultural and political variations across the 70 states which Htun and Weldon examine, shows how the route towards gender justice must weave and change according to the unique circumstances of political dynamics and the obstacles and opportunities encountered in each context. 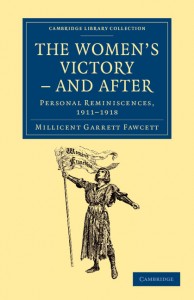 From the other end of the women’s rights story, one of our books, The Women’s Victory – and After, Personal Reminiscences, 1911–1918 by Millicent Garrett Fawcett, describes the demands issued by the National Union of Societies for Equal Citizenship in the UK:

“1. We demand equal pay for equal work. And we demand an open field for women in industrial and professional work.
2. We demand the immediate reform of the divorce law and the laws dealing with solicitation and prostitution. An equal moral standard must be established.
3. The Government is in favour of widows’ pensions in principle. By constant pressure we mean to make the House of Commons turn principle into practice. We demand pensions for civilian widows.
4. Women must speak for themselves as well as vote. We want to extend the women’s franchise, and we are determined that women candidates holding our equality programme shall be returned to Parliament at the next election.
5. At present women are not legally recognized as the guardians of their children. We are working to secure equal rights of guardianship for both parents.
6. Lastly, we are demanding the opening of the legal professions to women. We wish to enable women to become solicitors, barristers, and magistrates.” (pp.161-2)

It doesn’t involve looking far to see that not all of these demands have been met. The right to vote was only granted last year in Saudi Arabia. The campaign for equal pay is ongoing, and has been highlighted recently in the media; at the BBC and in Hollywood. #MeToo and #TimesUp are loudly protesting inequality and harassment in the workplace. Globally, women’s education, health, and the violence against them is worse than that of men.

State by state, the variety of women’s rights shows both the potential and the obstacles; Htun and Weldon remind us that gender justice is a long game with many different playing-boards and fluid rules. The World Economic Forum estimates that gender parity across the world will take over two centuries, 217 years to be exact, but it is exciting to think of where the next hundred years will take us.

We have come a long way since 1919, with female politicians (though women hold only a fifth of parliamentary seats), lawyers, and leaders of countries (again, only 19 out of a possible 196 heads of state); access to higher education; rights to work and family; and (some) equality under law. International Women’s Day is about celebrating these achievements and continuing to strive for gender parity.

You can learn more and follow the Cambridge University Press Bookshop here:

About the Author: Alice Tranah

Alice Tranah grew up in Cambridge and, after studying history at University, fell delightely into life as a bookseller, first in London and then here for Cambridge University Press Bookshop....