Of Kerner, King and the Great Uprising: Fifty Years Later

Written by: Peter B. Levy 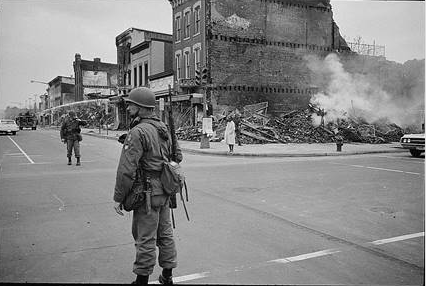 How should we respond to the golden anniversaries of the publication of the Kerner Commission’s Report (March 1968) and the greatest wave of racial unrest in American history which followed Martin Luther King, Jr’s assassination (April 1968)?   Will we allow these anniversaries to pass largely unnoticed, preferring to commemorate more triumphant moments?  Or will we recognize the urgency of reflecting on this mass wave of revolts and the Commission’s and King’s understandings of them?

Previous anniversaries of the Commission’s report and what I have termed the Holy Week Uprisings of 1968 suggest there will be minimal public reflection on these events because there has been a general consensus that they are best forgotten.  For instance, when I began my research into what became The Great Uprising, one of my first interviewees, state senator Frederick Malkus, discouraged me from investigating the “riot” in his hometown, Cambridge, Maryland, on the grounds that nothing good could come from my study.  Or as he put it, “Why would I want to “peel off that scab?” Likewise, in York, Pennsylvania, where I teach, decades passed before I learned that a revolt had taken place there because the community had done its best to bury public discussions of it.  Only the arrest of its Mayor, Charlie Robertson, in 2001, who was implicated in the murder of Lillie Belle Allen in the midst of York’s 1969 riot,  compelled the community to change course.  And even then, many opposed reopening Allen’s unsolved murder case on the grounds that the trial would undo years of  racial progress.

This view, that nothing good can come from “peeling back that scab,” grows out of an acceptance of a misleading narrative about the causes and consequences of the uprisings of the 1960s.  This widely-accepted interpretation rejected the Kerner Commission’s and King’s claims that white racism caused the revolts.  Instead, it held black radicals, abetted by black moderates and culturally permissive liberals responsible. Spiro Agnew, who is one of the central figures in my study, for example, rose from obscurity to the vice presidency in a mere two years by promoting such a frame.  First, in 1967, he demanded the arrest of black radical H. Rap Brown for inciting a riot in Cambridge, Maryland.  The following spring, Agnew accused black moderates of fomenting violence in Baltimore following King’s death.  Finally, in the late spring and summer of 1968, Agnew led the attack on the Kerner Commission, asserting that its diagnosis of the causes of the disorders was faulty.   Or as he put it, the Commission blames “everybody but the people who did it [rioted]….  If one wants to pinpoint one indirect cause … it would be … that lawbreaking has become a socially acceptable and stylish form of dissent.”  Agnew also rejected the Commission’s call for more spending on social and economic programs on the grounds that such an approach rewarded the rioters.

While Richard Nixon had already determined that blaming black radicals and complicit liberals for the nation’s disorders represented a powerful strategy for winning the presidency in November, he chose Agnew to serve as his running-mate, to the surprise of virtually everybody, because he understood that the heretofore obscure one-term Maryland Governor would help him appeal to the so-called forgotten Americans whose commitment to racial equality had always been weak.  (Donald Trump adopted a similar tact in response to recent unrest.)  Put somewhat differently, at the time many politicians and pundits, including President Johnson, rejected both the Kerner Commission’s and King’s diagnoses in favor of one that cast blame elsewhere.  Yet this interpretive framework, as Jeanne Theoharis has insightfully observed, signified a remarkable aversion of the truth that enabled whites to demonize blacks for “the outpouring of anger” while simultaneously allowing society to “avoid responsibility” for the perpetuation of racial injustices, which blacks outside of Dixie had protested against for years.

As my study of uprisings in three communities shows, radicals did not cause the riots.  Even in Cambridge, Maryland, which attracted national attention in 1967 because it embodied this interpretation, a closer examination demonstrates that the cause of the unrest lay elsewhere.  As National Guard Commander George Gelston informed the Kerner Commission, “if there was no problem, there would have been no invitation” to H. Rap Brown to speak in the first place.  (Most sources identified Brown’s fiery address as the cause of the fire that devastated much of Cambridge’s black community.)  Moreover, the fire which took place following Brown’s speech, spread not because black radicals and moderates fueled the flames but because the local police chief and the all-white fire force refused to put it out in order to punish civil rights activists with whom they had long been at odds.  Similarly, Baltimore’s uprising did not represent a spontaneous eruption of anger.  Nor was it provoked by radicals.  On the contrary, for decades activists had demanded an end to racial discrimination in housing, employment, the schools and the criminal justice system but they achieved token change, at best, from the city’s moderate leaders.   King’s death merely provided the spark for its long-simmering revolt.  Likewise, for years York, Pennsylvania’s political leaders rebuffed nearly every demand of the local civil rights movement.  For instance, its mayor, John Snyder, expanded rather than disbanded its much-despised canine force and thwarted efforts to establish a civilian review board.  He also treated the Pennsylvania Human Relations Commission efforts to promote reform with disdain.

Fifty years after the publication of the Kerner Commission’s Report and King’s death, we would do well to respond more favorably to its findings, which echoed the sentiments King expressed in his “Other America” speech,” that a preference for tranquility and order, not black radicals, caused rioting.  We also would do well to heed King’s and the Commission’s warnings that we will experience “recurrences of violence and riots over and over again” unless we learn from the past and reject the policies that perpetuate ghetto conditions instead of promoting “social justice and progress.”

The Great Uprising: Race Riots in Urban American during the 1960s

About the Author: Peter B. Levy

Peter B. Levy is a Professor of History at York College of Pennsylvania, where he teaches US history classes. His books include Civil War on Race Street: The Civil Rights Movement in Cambridge, Maryland (2003). ...