"He would be amused by any portrayal of himself. It means people people remember him. People give a hoot. People care. Which is why we did this whole series." Joey Richter talks about his experiences playing a young Ernest Hemingway in Edgar Allan Poe's Murder Mystery Dinner Party.

To read our first interview in this series, visit here.

In the second in our series discussing stage and screen portrayals of Ernest Hemingway by the men who played him firsthand, we are talking with Joey Richter of Edgar Allan Poe’s Murder Mystery Dinner Party. 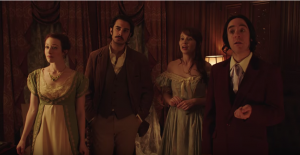 As a theatre person myself, I know all too well that in these times, your best bet to actually create art is simply to team up with a group of like-minded, passionate and creative people with similar visions.

Parody is meant to celebrate and we are meant to have a laugh at it.

Actor Joey Richter is familiar with the feeling as well.

Richter became involved with the project after working on yet another parody, School of Thrones, which placed the characters of Game of Thrones in a modern high school setting. He connected with Mary Kate Wiles of The Lizzie Bennet Diaries fame, who would soon star alongside him as Annabel Lee.

The series was described as Clue meets Midnight in Paris. (Midnight in Paris, of course, also features a memorable portrayal of a young Ernest Hemingway played by Corey Stoll, which Richter credits as being the only other Hemingway performance he has watched.)

The saga opens as Edgar Allan Poe throws a murder mystery party to impress Annabel and invites only his best and brightest friends: Louisa May Alcott, Oscar Wilde, Emily Dickinson, Charlotte Bronte, HG Wells, and, of course, a young, cocky Ernest Hemingway, among them.

When somebody (and then many more somebodies), actually DO end up dead, all goes awry with comedy, chaos, and multitudes of inside book nerd jokes.

Think of him as a “more Swashbuckling Ron Swanson (Parks and Recreation). He’s like a Hemingway type. He’s also very dry. Actually, (this Hemingway) is a combination of Ron Burgundy (Will Ferrell’s character in The Anchorman) and Ron Swanson.”

The charming and handsome Richter portrays Hemingway in a way we are used to seeing him: confident, womanizing, and usually (always) with a drink in hand. His portrayal is also laugh-out-loud hilarious and nuanced and I was so happy to catch up with Richter to talk about his experiences getting into character and his history with all things Hemingway.

The series, consisting of 11, 15-minute episodes, ends each part on a cliffhanger, and was filmed as a feature film, with the introductions of the characters being the very last scene which was shot.

One YouTube commentator left a remark that, “The killer can’t be Hemingway because he’s too dumb.”

Does Richter think the real Hemingway gave the same impression of not being as brilliant as we know he really was?

Richter is thoughtful about this. “You can either look at it from a Murder Mystery standpoint so that people will think I’m dumb and not figuring the mystery out. It’s hard to take anyone who talks about how brilliant they are all the time seriously. The others would think that he can’t be as great as he thinks he is. With all the stories of the hunting and the boxing, in this day and age, this portrayal of Hemingway feels like the cliche of a man’s man. But deep down, I think it was a lot more. Maybe this guy was really compensating. Think of him as a “more Swashbuckling Ron Swanson (Parks and Recreation). He’s like a Hemingway type. He’s also very dry. Actually, he’s a combination of Ron Burgundy (Will Ferrell’s The Anchorman) and Ron Swanson.”

Did Richter ever struggle when it came to parodying a man who we ultimately know was a very troubled figure that eventually would commit suicide?

He would be amused by any portrayal of himself. It means people people remember him. People give a hoot. People care. Which is why we did this whole series.

Hemingway, Richter thinks, “He would be amused by any portrayal of himself. It means people remember him. People give a hoot. People care. Which is why we did this whole series.”

Richter’s favorite writers among the Murder Mystery crew are Oscar Wilde and HG Wells, but his favorite character on the show is Edgar Allan Poe, who Richter finds “so funny and so self deprecating. I love how pathetic he is. It’s so endearing and he tries so hard to no avail.” 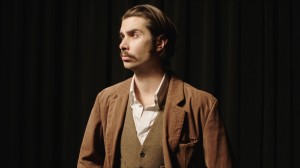 Throughout the series, Richter displays a signature wink (blinking many times at once), which I had to ask about

“I didn’t realize the crazy wink was so consistent. It came about from Hemingway being overly sure of himself. He’ll kiss a woman’s hand three times in a row, and wink multiple times. The more drunk he gets, the more he winks and kisses.”

After playing Hemingway in something so clearly comedic, would Richter ever like to play the man in a dramatic script?  “Of course. I think it would be interesting. As a mostly comedic actor, I’d love that change. He also has a lot of issues and insecurities which I would like to explore.”

Richter admits that he actually has never read a book by Hemingway or any biographies, and is really looking forward to reading some of The Letters of Ernest Hemingway.

What’s next on the agenda for Richter? He is currently working on a new show, and YouTube provides endless hilarious clips of his work proving that this is just the start for this young funnyman.

Hemingway just wants to be accepted and recognized for his work. Hemingway’s ego manifested in a different way and comes from insecurity and friendly competitiveness.

When asked if he’d like to take a stab (not a literal one, of course, but given his history with murder mystery shows, we can never know) at another historical figure, Richter said he would love to tackle Buster Keaton or Charlie Chaplin.

Sounds good to us, and we look forward to watching what our favorite Hemingway of YouTube will do next!

Thanks for sitting down with us, Joey!

About the Author: Diana Rissetto

Diana Rissetto is the Senior Media Associate at Cambridge University Press in the New York City office. She is also a playwright and has often been called a walking sitcom. ...