The Optimistic Freud? Thoughts on Life and Death 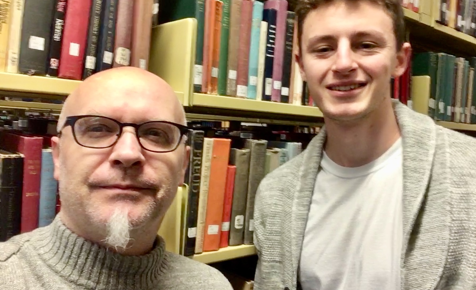 Civilization and Its Discontents represents a continuation of Freud’s work in Beyond the Pleasure Principle, wherein he posited the existence of a death drive that opposes the drive toward life. In doing so, Freud firmly established himself as a dualist that saw life as a struggle between the life and death drives. While in Beyond Freud sees no resolution to this eternal struggle of human nature, the psychoanalyst ends Civilization on a marginally more optimistic note, stating that “it is to be expected that [eternal Eros] will make an effort to assert itself in the struggle with its equally immortal opponent.” It appears almost as if Freud is cheering for Eros to prevail. Yet such optimism is undermined by the myriad claims and speculations Freud makes throughout his book.

As Todd Dufresne argues in The Late Sigmund Freud, Civilization begins as a response to Romain Rolland’s private critique of Freud’s The Future of an Illusion. Rolland generally agreed with Freud’s assessment of religion in the book, but claimed that Freud neglected to acknowledge the actual source of religious feeling – the mystical “oceanic feeling” that exists beyond institutional religion. Although Freud does not deny its existence in other humans, he claims that he has never experienced it himself. He then tries to understand the feeling “scientifically,” which for Freud means psychoanalytically.The ego, he says, “maintains clear and sharp lines of demarcation [with the outside world].” The only exception is being in love. Here the boundary between ego and object becomes blurred so as to experience oneness with the object of affection. Aside from this one instance, the ego tends to delimit itself from the outside world and defend against external sources of pain. He concludes that the oceanic feeling is too subjective to have a physiological basis, and that the need for religion is tied to an infantile yearning for paternal protection (i.e. God).

Freud finds this obsession with the paternal figure of God to be lamentable, narcissistic, and unnecessary. Because Freud adopts a Hobbesian view of human nature, one that is characterized by aggression and hate, he sees religion – Christianity, more specifically – as an overreaction to this human drive toward extinction. An extreme example of this overreaction is found in the form of morally praiseworthy people, such as saints and pacifists. Ironically, the most saintly among us are created in response to intense inclinations toward aggression.

In Freud’s view, we enter into society to escape suffering but end up inflicting it on ourselves once again in the form of laws and the suppression of natural impulses. Despite the benefits we receive from entering into society, love and civilization ultimately come into conflict with each other. One reason for this is that civilization saps each person’s sexual energy by sublimating it into cultural endeavors. What each person really wants to do, Freud says, is to indulge in these sexual and aggressive inclinations. However, because our instincts are inconsistent with the order and proper functioning of society, we divert this energy into something that will benefit society (e.g. making a work of art). The result of this clash between desire and suppression is a guilty conscience. Other taboos and laws contribute to this even further. What we do not get from religion in the form of an authoritative figure, we get from the “cultural superego.” The superego or (literally) the “over-I” watches over a person’s actions and intentions. Guilt is a result of the tension that exists between what the ego wants and the demands of the superego. Consequently, the struggle between Eros and the death drive accurately encapsulates the evolution of civilization; as Freud says, it answers “all the riddles of life.”

While Freud ends Civilization on a relatively optimistic note regarding Eros, he shows the reader throughout that civilization and the death drive are eternally paired. Our reliance on love, Freud argues, is just a means of relief from the everyday malaise that we experience, for instance, in the forms of the Oedipal complex, patricide, primary narcissism, sadism and masochism, the negative therapeutic reaction, and women’s restraining influence on society. What is most true for Freud is the death drive – with love and culture being nothing but a response to this primal force. Freud begins Civilization as a response to Rolland’s claims on behalf of  the oceanic feeling, on a love extended to all beings. But what Freud demonstrates through his metapsychology is that Eros does not form the foundation for civilization. According to the late Freud, love is always secondary to the death drive. It is therefore hard to imagine a less optimistic view of human nature.

The Late Sigmund Freud: Or, The Last Word on Psychoanalysis, Society, and All the Riddles of Life 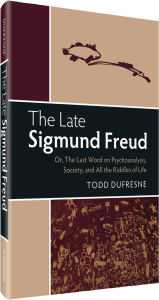 Freud is best remembered for two applied works on society, The Future of an Illusion and Civilization and its Discontents. Yet the works of the final period are routinely denigrated as merely supplemental to the earlier, more fundamental ‘discoveries’ of the unconscious and dream interpretation. In fact, the ‘cultural Freud’ is sometimes considered an embarrassment to psychoanalysis. Dufresne argues that the late Freud, as brilliant as ever, was actually revealing the true meaning of his life’s work. And so while The Future of an Illusion, Civilization and its Discontents, and his final work Moses and Monotheism may be embarrassing to some, they validate beliefs that Freud always held – including the psychobiology that provides the missing link between the individual psychology of the early period and the psychoanalysis of culture of the final period. The result is a lively, balanced, and scholarly defense of the late Freud that doubles as a major reassessment of psychoanalysis of interest to all readers of Freud.