November 23, 2017 sees the publication of Ecology, Conservation and Management of Wild Pigs and Peccaries by Mario Melletti and Erik Meijaard. In this post the authors bring to light the importance of these often-overlooked species. 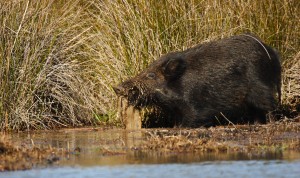 The idea to edit a major work on the ecology, conservation and management of two entire taxonomic families (Suidae and Tayassuidae) might seem ambitious. With Mario having done a similar book on wild cattle, Ecology, Evolution and Behaviour of Wild Cattle, also published by Cambridge University Press, we believed that it was worth trying the same for pigs and peccaries. We expected that it would take a considerable effort to pull together all the relevant information about all the species, and we were right. It was hard work to get experts to commit their precious time and write up their in-depth knowledge about these species. But our gamble paid off and the result is here. We really hope that this volume will find its way into not only the scientific community, but also to the general public with an interest in wildlife and the political decision-makers who need to understand how important pigs and peccaries have become in present-day environmental conservation, as well as development and sustainability thinking.

The new book provides the first ever comprehensive and up-to-date review on the ecology and conservation status of each wild pig and peccary species as well as the management of feral pigs. We believe that the monumental effort by all the co-authors will be rewarded by a significant increase in understanding and comprehension about the many suid and tayassuid species that live in close proximity to about 90% of the humans on our planet.

Learning from the first book on wild cattle, we thought that this second volume might well follow the steps of the first one. Thus we involved most wild pigs and peccaries experts across the world and we have also been successful to recruit most IUCN/SSC Wild Pig Specialist Group and Peccary Specialist Group members to contribute their valuable expertise to this project. The final result is an original book made possible thanks to the contribution of 100 international experts from 25 countries. But as mentioned, bringing together this heterogeneous group of authors with sometimes conflicting ideas, was a major task for us as editors. We should have learned from the quote attributed to Bernard Shaw: “Never wrestle with pigs. You both get dirty and the pig likes it.” There was some of that dynamic in trying to work with and coordinate the pig and peccary experts, who sometimes had strong views on issues varying from taxonomy to ecology and disease. But in the end we manage to settle the debates, albeit with a few grunts here and there.

The present book discusses the conservation status of pigs and peccaries from various angles: 1) as threatened conservation targets themselves; 2) as conservation threats to other species, e.g. feral pigs; and 3) as ecosystem engineers influencing survival of other species. We decided to include feral pig management in our book, because these invasive animals pose serious threats, for example, negatively impacting many ecosystems, hybridizing with native wild pigs species reducing their genetic diversity, increasing disease transmission to domestic stock, threatening indigenous species, in particular on small islands and destroying cultivated land causing important economic losses.

Furthermore the total estimated global domestic pig population is about one billion. That is about one pig for every 7 people, not counting wild and feral pigs. There are no less than 21 distinct species recognized by the scientific community and many of these are on unique evolutionary lines sometimes dating back millions of years, far older than our own species of modern humans!

We recognize that science is an ongoing effort. What is true today may well be outdated tomorrow. With that in mind, we present to you the best available and supported information on the wild pigs and peccaries of the world. And in that we accept that for some species or topics our knowledge is embarrassingly limited. For example, we still haven’t settled on a finally accepted taxonomy of pigs and peccaries and further morphological and genetic studies are needed. Similarly, the distribution and population trends of several species are almost unknown, in particular in Asia.

Many of the chapters in the book address the threatened status of pigs and peccaries. Most pig species in South-East Asia and some peccaries in South America are threatened by habitat loss and degradation, by hunting pressure, and by increasing isolation on small habitat islands where the combined impacts on small population size are exacerbated by continuous poaching  and other threats. One example is the pygmy hog, one of the rarest mammals in the world. The species was believed to be extinct until 1971 when it was rediscovered in two small areas in the Barnadi Reserve Forest and in Manas National Park in Assam, India. Since 1996, a conservation breeding programme has worked carefully with the remaining few animals, and through successful capture, captive breeding, and release programs, has managed to bring the species back from the brink of extinction. The current population is around 250 adults spread across a few populations – still far from safe but in a much better state than a few decades ago.

Wild, feral and domesticated pigs and peccaries provide a source of crucial protein for billions of forest dependent and other pork-loving people. Ask any Dayak hunter on Borneo, Papuan tribal people, or indigenous people of Amazonia about the most important species to their daily lives, and most likely one of the many species of pigs and peccaries will top their list. Humans have built entire cultures on the basis of their relationship with these species some of which dating back to at least 40,000 years ago. The oldest rock-painting in the world is, you guessed it, a wild pig – the babirusa of Sulawesi. Human-pig relationships range from the occasionally slice of bacon on a British breakfast place to intricate pig-based cultures on the Nicobar Islands (Andaman sea, Indian Ocean), where people dearly love their pigs, and compose songs in their praise. Another example of pig-human relationships comes from Cheju Island in South Korea where these animals were highly valued and respected. Pigs functioned, until the recent past, as transformers of human waste into fertilizers with the pigsty-privy an important part of the ecosystem. Pigs are even rumoured to have driven religious conversion. A Catholic priest who had worked with his Christian communities in Indonesian Borneo for over three decades, once told Erik a similar story. “The main reason that people have not converted to Islam”, he said, “was that Christianity allowed them to eat pork and drink alcohol”, both of which are prohibited to Muslims. How many other species in the world can put that on their CVs below the heading of “Influence on Human Culture”? Unfortunately in our modern societies pigs are not anymore perceived and managed “as-pigs” but “as-pork” allocated in huge producing factory farms. The welfare state of pigs-as-pork awaiting slaughter in factory farm is stressful and unhealthy. We hope that this trend will change and maybe Sus scrofa in this new era will again be valued “as-pigs”.

Pigs and peccaries do not just benefit people. They are also an important food item for many wild carnivores, including such conservation icons as tigers, lions, leopards, jaguars and wolves. In areas where they remain abundant, these large, omnivorous landscape engineers are ecological keystone species. Through their feeding, rooting and sometimes predatory behaviour, pigs and peccaries have significant impacts on the ecological functioning of large and small ecosystems. Sometimes these impacts are positive, enriching otherwise more homogenous environments and allowing other species to thrive. But also, where pigs have been introduced into areas where native flora and fauna are not adapted to these invaders, they can have a major negative influence and even drive other local species to extinction. So in many areas, pigs and peccaries are very important in the conservation of Earth’s biodiversity.

The above examples emphasize the incredible importance of pigs and peccaries for a healthy functioning of both the natural world and human societies. Pigs may even contribute directly to our health, as shown in recent experiments that aim to grow human organs in domestic pigs through a process called gene editing. This cross-species experiment aims to fill the growing gap between supply and demand of donor organs, potentially saving many humans lives, although at the unfortunate expense of the pigs. Once again, the importance of pigs and peccaries to us humans is  clear, not only as a potential life saver and major source of food, but also as an intelligent sensitive species that is genetically surprisingly similar to us. Being the most numerous large mammal species in the world, we should pay more attention to pigs and peccaries. What does the evolutionary history of these animals tell us about their genetic diversity and how can that knowledge be used in the food and medical industries? What can we learn from the recovery of wild pigs in Europe and their invasive nature in areas where they have been introduced, and how does this help us protect rare pig species on the edge of extinction? The present book aims to fill some of these knowledge gaps and provide a broad audience with an authoritative account of everything about pigs and peccaries you would ever want to know.

We hope that through this volume we can raise the profile of wild pigs and peccaries which are too often overlooked by the scientific community. We also hope that this work can stimulate further research. And finally, we hope that we have convinced the readers what amazing species pigs and peccaries are, and that they need more consideration than in the past.

About the Author: Erik Meijaard

Erik Meijaard is Chair of the International Union for the Conservation of Nature's Wild Pig Specialist Group and the IUCN Oil Palm Task Force. He is an Adjunct Professor at the Center of Excellence for Environmental Decisions at the University of Queensland, author of six books and 197 scientific papers, and a frequent writer in popular media. He h...