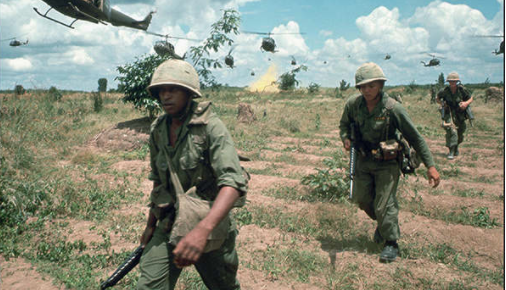 The most widely accepted view about the Vietnam War is grounded on the assumptions that it was a tragic mistake for the United States to get involved in a struggle in which it had no vital interests and that the war itself, waged in support of a corrupt regime lacking a viable social base, clearly was unwinnable from the start.  The widely anticipated Ken Burns documentary series for PBS occasionally provides brief asides that if explored more fully might cause its viewers to question these assumptions, but overall it does not significantly stray from the conventional view of the war.  But there is good reason to challenge the conventional narrative.  In my forthcoming book, The Vietnam War Reexamined (Cambridge, December 2017), I stress that America’s effort to prevent a Communist takeover of South Vietnam was in the national interest, that the South Vietnamese regime had legitimate nationalist credentials, and, moreover, that the war could and should have been won at far less cost than the United States, South Vietnam, and their allies suffered in defeat.

To focus on just one of these issues, the question of whether the war was winnable is one of the most misunderstood subjects in the multifaceted debates over America’s involvement in  Vietnam.  This is the case because the discussion rarely focuses on the strategy of graduated pressure the United States employed against North Vietnam. Graduated pressure, the brainchild of then Secretary of Defense Robert McNamara, was based on the notion that military conflicts could be conducted on the basis of cost-benefit analysis. According to McNamara, to get the most benefit at the least possible cost, the United States should gradually increase military pressure on North Vietnam.  Facing that pressure, Ho Chi Minh and his comrades in Hanoi, presumably employing the same reasoning as McNamara and his sophisticated civilian colleagues in the Pentagon, would realize that the benefit of conquering South Vietnam was not worth the cost of doing so and therefore accept a settlement that confined Communism to North Vietnam.

The main means of applying graduated pressure on North Vietnam was the bombing campaign known as Rolling Thunder, which lasted from 1965 to 1968.  The trouble with this approach, which not incidentally violated basic principles or war-fighting, is that for a long time it left the most important targets in North Vietnam untouched. They were held hostage so they could be used if necessary to apply greater pressure on Hanoi later on.  This enabled the North Vietnamese to weather a relatively small initial storm and prepare defenses for what they could anticipate was coming next.  Graduated pressure also prevented the United States from applying decisive force early, which it was capable of doing, and instead led to a war of attrition, thus playing directly into the hands of the North Vietnamese.  Graduated pressure also permitted Hanoi to build a sophisticated air defense network and thereby dramatically increased American casualties, especially among the air crews that had to bomb minor targets time after time while leaving those that might have crippled North Vietnam’s ability to wage war untouched.   Meanwhile, the Communist leadership in Hanoi, rather than bothering with cost-benefit analysis as McNamara and his civilian advisors seemed to expect, exploited graduated pressure to wage their war of attrition in South Vietnam regardless of the cost in lives, confident a drawn-out conflict eventually would erode American will.

Once the United States became involved in combat in Vietnam, graduated pressure gave birth to gradual escalation, under which the number of U.S. troops in South Vietnam was increased in installments between 1965 and 1968 without a coherent plan for actually defeating the enemy.  It was a frustrating failure that wasted three critical years at great cost and pain to the American people.  Meanwhile, the flaws of gradual escalation were compounded on the ground by restrictions imposed by Washington that prevented American combat forces from cutting the Ho Chi Minh Trail, the main North Vietnamese supply route into South Vietnam, and also enabled North Vietnamese and Vietcong forces to find sanctuary in Laos and Cambodia.  These restrictions further enhanced Hanoi’s ability to continue a war it might otherwise have lost.

These problems notwithstanding, a good case can be made that as a result of changes in American tactics after 1968, by 1972, even as most American forces had been withdrawn from South Vietnam, the Communist insurgency there had been largely defeated.  This in fact was the reason that North Vietnam was forced to change its strategy in 1972 and launch an all-out conventional invasion of South Vietnam, and, after that offensive was defeated at a terrible cost to Hanoi, to launch a second and this time successful invasion in 1975.  The latter’s success was due largely to the fact that between 1973 and 1975 South Vietnam had been weakened and demoralized by drastic cuts in US aid while North Vietnam received all the aid it needed from the Soviet Union to rebuild and simultaneously modernize its military forces.

There are many reasons to question the conventional wisdom that the American effort to protect South Vietnam from Communist aggression was a mistake and a lost cause from the start.  It was neither. That is the message of The Vietnam War Reexamined.

About the Author: Michael G. Kort

Michael G. Kort is a Professor in the Social Sciences department of Boston University. He is the author of several books, including The Soviet Colossus: History and Aftermath (2010), The Columbia Guide to the Cold War (2001), and A Brief History of Russia (2008). ...