This interview with Kiernan Ryan and Ewan Fernie, author of Shakespeare for Freedom, was recorded at The Shakespeare Birthplace Trust on 10th May 2017.

Shakespeare for Freedom presents a powerful, plausible and political argument for Shakespeare’s meaning and value. It ranges across the breadth of the Shakespeare phenomenon, offering a new interpretation not just of the characters and plays but also of the part they have played in theatre, criticism, civic culture and politics.

Watch the 15 minute video interview with Kiernan and Ewan here 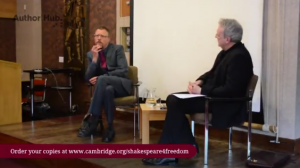 Shakespeare for Freedom Interview with Kiernan Ryan and Ewan Fernie

About the Author: Ewan Fernie

As a critic, I'm about opening up and analysing the life there is in Shakespeare and other literature. This involves thinking about the ways verbal and dramatic art constitute sensuous, ethical and even spiritual experience. I'm also interested in the way standard critical forms such as the essay and approved styles of critical prose reveal but als...