How Marie Curie Taught Me to Persevere

I am a devoted scientist, a professor in STEM, particularly in biomedicine, and I also juggle my private life in parallel with my scientific career. I have two daughters, I have divorced from my first husband – a physicist – and remarried with another physicist with whom I now also collaborate scientifically. All of this may seem simple when it is written down on paper, but, in daily life, being a woman and a scientist it’s way more complicated! That’s why the life and successes of Marie Curie have always been a powerful inspiration throughout my whole career. 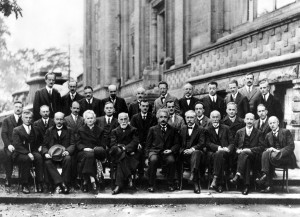 She was born in Poland and she dreamt of becoming a physicist – such a strange ambition for a woman at that time. She pursued her dream and moved to Paris, where she met the man, another physicist, who would have become her husband and with whom she then shared all her private and scientific life.

At the beginning of my own scientific career, I saw the picture of the 1927 Solvay conference on Quantum Mechanics. This picture struck me as extremely interesting: you can see a lot of important physicists, from Einstein and Plank to Heisenberg. Marie Curie was the only woman. Her husband Pierre Curie was already dead at that time.

endure in spite of

Along the years, when I had to face difficulties due to trying to reconcile professional aspirations and domestic life, I recalled the main lesson from Marie Curie’s own story: to endure in spite of all the challenges a woman has to face to be a scientist, a mom and a wife. Or even just a woman in a society built by men which follows’ men’s pace.

A very simple example: the faculty meetings are very often, if not always, scheduled at late afternoon. However, this is the worst moment for young women, as they usually have to pick up their little children from school. It is not as much of a hassle for men that have a fantastic wife at home to take care the kids.

There is another lesson that I learnt: women need support to share the responsibilities of a family. Pierre Curie supported Marie Curie and they worked together all their life. A connected consequence is that women do not have enough trust in themselves and are less aware of their abilities. We have to learn to be persistent, just like men. This is the constant message I try to give to my daughters and young collaborators.

I will not give up.

I do believe that we have to work hard as scientists and women to give a better opportunity to our younger generation. When life gets a little bit too hard I remember the picture of Marie Curie at the conference of 1927 in Solvay, and I think that, just like her, I will not give up.

We are celebrating Marie Curie’s life and legacy on her 150th birthday with a collection of blogs and free content around the theme of Women in STEM.
Check out our content Hub: Marie Curie at 150 – Celebrating Women in STEM

About the Author: Caterina A. M. La Porta

Caterina A. M. La Porta author of The Physics of Cancer 2017, is Associate Professor of General Pathology at Università degli Studi di Milano and group leader of the Molecular Oncology Laboratory there. In 2015, she founded the university's Center for Complexity and Biosystems. She has organized ...