‘Never Mind the Bollocks: 40 Years On’ by Matt Worley / WIN! A copy of the new 40th Anniversary Deluxe Edition

It's 40 years since the release of 'Never Mind the Bollocks, Here's the Sex Pistols' - one of the most iconic and influential albums in music history. In this exclusive article for fifteeneightyfour, Matt Worley, author of new punk book, No Future: Punk, Politics and British Youth Culture, 1976-1984, looks back at one of punk's era-defining records and finds that it still has the power to thrill, provoke and excite.

In the moment, punk was arguably best served by the 7” single rather than the album. Like those 1960s ‘Nuggets’ to which Lenny Kaye lent the ‘punk’ label in 1972, the vibrancy, energy and snotty irreverence of kids bashing out a noise in the garage hits hardest when its short and sharp. Been and gone. Hit and run. Given punk emerged, in part, as a reaction to rock’s growing tendency to expand and display its virtuoso chops, sticking to a format that was supposedly more disposable and ephemeral made perfect, provocative sense.

This, initially, applied as much to the Sex Pistols as anyone else. While Never Mind the Bollocks, Here’s the Sex Pistols is this month celebrated for reaching its 40th anniversary, it was the singles released prior to the album that really made the impact back in 1976–77. To be sure, the album’s title led to a court case over the meaning of the word ‘bollocks’, and the album’s newest song, ‘Bodies’, had enough expletives to excite The Sun.  But the controversy around the album appeared mere froth compared to the seditious ramifications of the ‘God Save the Queen’ single released earlier in the summer to coincide with the Silver Jubilee. Likewise, the faux-outrage at swear words appeared somewhat after-the-fact, given that the initial moral panic that engulfed and effectively popularised punk was built on the Sex Pistols’ ‘foul mouthed’ appearance on Thames Television’s teatime Today programme in December 1976. Indeed, the album was even met by mumblings of discontent among some punk aficionados, what with its polished production and the inclusion of all four of the band’s 7”’s across its twelve songs. The ‘swindle’, it appeared, was about to begin.

Today, however, with musical formats, production and consumption so different to the 1970s, Never Mind the Bollocks remains an invaluable cultural artefact. Bar four songs and the odd cover version, it comprises the Sex Pistols set that helped tear a hole in the cultural fabric and continues to excite wistful nostalgia amongst those who were there. Its Jamie Reid designed sleeve still looks stunning; its yellow, pink and black colouring and ransom-note lettering iconic. And the sound, while somewhat claustrophobic compared to the demos and live recordings that continue to circulate, remains confrontational – from the goose-stepping intro to the up yours sign off at the end. Johnny Rotten’s words, in particular, retain a pertinence and a spite that allow us to remember just why punk resonated so widely and deeply. His lyrics to ‘Anarchy in the UK’, ‘God Save the Queen’ and ‘Holidays in the Sun’ remain vivid snapshots of the 1970s, what Jon Savage described as scrambled newscasts from a world beset by hostile forces: terrorism, the cold war and, most acutely, a prevailing mood of decay. The record bristles with exhilarating negation – no feelings, no future – and the pull of abjection. On ‘Bodies’ we are taken into the gurgling bloody mess of an abortion; ‘Problems’ dissects the narcissism of self-pity; ‘EMI’ mythologies the Pistols’ as it demystifies the machinations of the music industry. Lines jump out: ‘a cheap holiday in other people’s misery’; ‘there is no future in England’s dreaming’; ‘for people like me there is no order’; ‘I wanna destroy passer-by’; ‘I don’t believe illusions, too much is real’;  ‘blind acceptance is a sign, of stupid fools who stand in line’. Throughout, there is a very real sense of how, for some at least, it felt to come of age in 1977, when something was happening, something was changing – but it was hard to know exactly what.   All in all, Never Mind the Bollocks marks the Sex Pistols end, a record – both vinyl and historical – of their assault on culture.

To celebrate 40 years since the release of Never Mind the Bollocks, Here’s the Sex Pistols, we have TWO copies of the new 40th anniversary cd/dvd box set to give away. We’re giving away one copy on Twitter and one copy on Facebook. 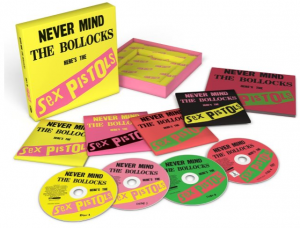 About the Author: Matthew Worley

Matthew Worley is a Professor of Modern History at the University of Reading. He specialises in the relationship between youth culture and politics in the 1970s and 1980s and is a co-founder of the Subcultures Network. ...