‘He rarely spoke of what he went through.’ Author Clare Makepeace reveals how her grandfather inspired her new book, ‘Captives of War’ 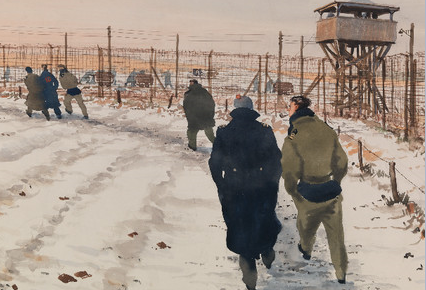 Life behind the barbed wire fence

In her new book, Captives of War, published this week, Clare Makepeace uses war-time diaries, letters and logbooks written by British POWs in the Second World War to throw fresh light on their experiences in captivity. In this exclusive article for fifteeneightyfour, Clare tells how her grandfather's reluctance to talk about his own experiences as a POW in Poland during World War Two inspired her to write the book.

The thing I love most about writing history is that it is unique. By that I mean each historian has their own interpretation of the past, which no one else can replicate. The history they write is a product of academic rigour as well as their own character. That second component doesn’t make history fictitious. It makes it relevant. Through being written by historians living in the present, history speaks to today’s concerns. Historians shine light on possible future paths we might take from here, by illuminating those we took in the past.

I was obsessed by the cultural history of warfare long before I realised why. My grandfather was captured in France on 12 June 1940. He spent almost five years as a prisoner of war (POW) in Poland. He rarely spoke of what he went through. The pain, my parents said, was too great. From an early age, I struggled to reconcile my kind, patient, unassuming grandfather going through things too dreadful to discuss. This is where my interest stems from. I am preoccupied with the ways in which the lives of individuals, through no fault of their own, were turned upside down by a global conflict, and how those people found meaning in that brutality and chaos.

It was something my grandfather said, back in 2008, that inspired me to write Captives of War. British Prisoners of War in Europe in the Second World War. Towards the end of his life he opened up a little more about his time as a POW, and I started to encourage him to write his memoir. One day he said ‘Why would I record my story? It would just be one long tale of humiliation.’ At that moment, I realised the way he saw his experience and how I saw it differed vastly. I admired my grandfather for what he had endured and survived. He, meanwhile, was ashamed. I wanted to understand his point of view: how it felt to be a POW and how these men made sense of the experience.

Captives of War is not about my grandfather. I wanted to get as close as possible to how POWs felt at the time of captivity, so I drew upon the diaries, letters and logbooks composed by POWs while they were behind barbed wire. My grandfather, alas, did not keep any. Instead, my book follows seventy-five other men, and delves into their inner and intimate worlds, following their journey from capture, through months and years of imprisonment, and their eventual liberation. I also look at POWs’ homecoming and return to civilian life.

By focusing upon the thoughts and emotions of these men, Captives of War opens up a whole other dimension of what it meant to be a prisoner of war, and a man in the Second World War. I reveal how, in their fantasies, POWs lived with their sweethearts, wives and parents back at home. I demonstrate how these men coped with their indefinite sentence by optimistically anticipating the war would end imminently. I expose the mental disturbances that tore through their minds.

And what of the future paths upon which Captives of War shines a light? Recently, with Brexit, Trump’s election and the AfD’s success in Germany, it seems to me that as those with a living memory of the Second World War pass away, we are readily forgetting the horrors they went through. I wrote Captives of War because I was acutely aware of the everyday, emotional cost that the Second World War inflicted on the lives that were entangled in it. I hope readers of my book will be encouraged not to take for granted global peace.

Captives of War: British Prisoners of War in Europe in the Second World War by Clare Makepeace is out now.

About the Author: Clare Makepeace

Clare Makepeace is an Honorary Research Fellow at Birkbeck, University of London....