NASA and the European Space Agency (ESA) both place great emphasis on public engagement, giving back to the taxpayers who support space exploration. When NASA sent out a bulletin asking astronomers to speak to groups during the Great American Eclipse of August 21, 2017, I signed up. I didn’t get an assignment, but three days before the event I got a frantic call from Steve Fjeldsted, the Director of Library, Arts, and Culture at the South Pasadena Library in southern California. He wanted to assemble a program to view the eclipse, with a featured speaker. He had gotten my name from my colleague Bill Patzert who knew I had recently published a popular book Worlds Fantastic Worlds Familiar on planetary science. I jumped at the opportunity, as interest in the eclipse was high, even though southern California was only going to see a partial eclipse with about 70% of the Sun occulted.

This eclipse was truly an American event, cutting a dark swath across the middle of the nation.

This eclipse was truly an American event, cutting a dark swath across the middle of the nation. Every part of the continental United States saw  at least a partial eclipse as the 70-mile–wide full shadow of the Moon (the “umbra”), along with its much wider partial shadow (the “penumbra”),  barreled across the county in one and a half hours.  The path of totality swept across many major cities, including Salem, OR; Lincoln, NE; St. Joseph, MO; Kansas City, MO; St. Louis, MO; Nashville, TN and Charleston, SC.

For the event at the Library, I planned a little real-life demonstration using my cell phone flashlight for the Sun, an old dust-gathering globe sitting in a corner of my living room for the Earth, and a grapefruit from the tree in my front lawn for the Moon. The fruit just happened to be the correct size for the Moon with respect to the Earth-globe. Children called up from the audience held the “Earth” and “Moon”, and the child who held the “Moon”, the grapefruit impaled on a stick, circled around the globe and cast a clear shadow. Holding the cellphone up, I was the radiant sun. The audience really appreciated this concrete demonstration of a solar eclipse. Eclipses and phases of the Moon are two of the most confusing astronomical phenomena for the public, and a concrete demonstration is a great teaching tool.  And of course I showed plenty of pretty pictures from NASA as well.

Eclipses and phases of the Moon are two of the most confusing astronomical phenomena for the public, and a concrete demonstration is a great teaching tool.

We switched over to NASA TV which covered the eclipse in successive cities as the shadow moved from west to east. People viewed the event on the Library’s lawn through eclipse glasses and stuck around for almost an hour. We saw the great celestial bite enlarging slowly – the ancient Chinese thought that solar eclipses were caused by a dragon devouring the Sun. Eventually more than two-thirds of the sun was occulted, but the daylight was almost as bright as ever, because the eye’s sensitivity is logarithmic. Nevertheless there were noticeable effects such as the eerily etched appearance of trees and cars caused by their sharpening shadows as the sun approached a more point-like source. The famously sunny southern California sky was an even darker cerulean blue.  I answered some of those confounding questions such as “If the Moon and the Sun both rise in the east and set in the west, why does the shadow move from west to east?” More spinning human models answered that one. Much of the South Pasadena City Council showed up. They were completely appreciative. 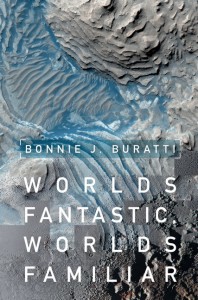 One key element of public engagement is to reach audiences that normally would not come to learn about your subject. Well, exploiting a spectacular event like an eclipse is a trick of cosmic proportions. The 200 or so people at my talk were not the same type of “fans” you would get in an astronomy club, yet they were engaged, interested, and awed. I managed to teach them a little bit of astronomy and let them know about some of NASA’s other activities.

And of course I always have a box of books with me in case anyone wanted one (quite a few did), and Steven Fjeldsted invited me back for a more traditional author event to speak about my book and sign copies.

Writing a book is one of the best ways for scientists to give back to the community, because books are there for all time (especially if you publish with Cambridge, because its books stay in print!), representing a stable resource that can be easily referenced and accessed. Combining speaking and hands-on activities – in my field it’s star parties; celebrations of events such as eclipses, transits and meteor showers; appearances of comets and close approaches of bright planets that can be easily viewed, and such  – enhances the reach and impact of a book. And as an author you have even greater authority to speak on a subject.

The brief moment of the eclipse is over, but the glow remains.

The brief moment of the eclipse is over, but the glow remains. Hopefully all who attended the event at the South Pasadena Library will have a little appreciation for what I say in my book about eclipses: there is “that tension that combines one’s sense of smallness in the midst of a great cosmic occurrence with the feeling of triumph that we know exactly when it is coming.”

About the Author: Bonnie J. Buratti

Bonnie J. Buratti is a Senior Research Scientist and Project Scientist at NASA’s Jet Propulsion Laboratory, California Institute of Technology. Her popular book Worlds Fantastic, Worlds Familiar: A Guided Tour of the Solar System was published in 2017. She is an astronomer with expertise on t...