Fundamental vs Phenomenological: Bridging the divide in modern physics

Horatiu Nastase, author of String Theory Methods for Condensed Matter Physics, describes the differences between reductionist and emergent approaches to modern physics and presents the duality approach to help solve uncalculable problems in strong nuclear forces, fluids and condensed matter. Is this approach the bridge between fundamental and phenomenological physics?

Throughout most of modern physics, it was split into what we might describe as a reductionist approach, finding ever smaller and more fundamental components of matter, in search for a single basic theory, and a more phenomenological approach, describing the complexity of large(r) scale phenomena through their own specific laws, without worrying about microscopic details. The first approach led to what is now elementary particle physics, and the second the condensed matter physics, and correspond to the two largest groups of most physics departments at important research universities.

I started as a member of the first community, studying string theory, which wanted to be the ultimate reductionist theory, a unified theory of Nature describing all fundamental matter and interactions as coming from the oscillations of tiny fundamental strings. This program is still ongoing, and doing well (though others might disagree). But starting with a seminal paper by Juan Maldacena (currently of the Institute for Advanced Study in Princeton) in 1997, a new path was laid out for string theory, one that created a bridge between the reductionist and phenomenological approaches.

The approach is an example of a “duality”, mapping phenomena in one description, in this case string theory under certain conditions, to phenomena in the other, generically a “phenomenological”, or “emergent,” kind of theory, and relates a regime in which we cannot do calculations on one side, to one where we can, on the other, and vice versa. The description has been applied first to the physics of strong nuclear forces (QCD), and lately, to the description of fluids, and condensed matter, and has helped solve difficult (usually not calculable) problems in them. 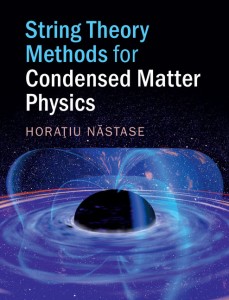 To be a bit more concrete, string theory is also a quantum theory of gravity, so it provides an extension of Einstein’s general relativistic description of gravity. On the other hand, consider for instance fluids, which can have strong interactions, and whose description is both important for the real world, and difficult, since for instance one of the Clay Mathematical Institute’s million-dollar “Millenium problems” relates to the Navier-Stokes equation for viscous fluids. The duality relates then gravity and fluids, in particular.

A black hole, the object with the strongest gravity that there is, has a surface called an event horizon, and phenomena near it can be mapped to phenomena in a fluid, but in a way in which it is easier to describe. The cover of my recent book on String theory methods for condensed matter physics tries to suggest this picture, of seeing fluid-like behaviour near the event horizon of a black hole. More generally, a condensed matter system with nonzero temperature can, under certain conditions, be mapped to a gravitational description that includes some kind of a black hole, since we can show that any black hole has an associated temperature as well.

Thus physics has come full circle, and the split of modern physics into fundamental and phenomenological, or reductionist vs. emergent, is being repaired, and once again we have physicists working in both camps.

About the Author: Horatiu Nastase

Horatiu Nastase, author of String Theory Methods for Condensed Matter Physics, is a Researcher at the Institute for Theoretical Physics at the Universidade Estadual Paulista, SĂŁo Paulo. To date, his career has spanned four continents. As an undergraduate he studied at Universitatea din BucureČ...

Did an apple really fall on Newtonâ...