The Neuroscience of Expertise

Merim Bilalić author of The Neuroscience of Expertise analyses the up and coming richest boxing match in history and predicts the outcome using neuroscience theory.

On Saturday, on the 26th of August in Las Vegas, the unbeaten American boxer Floyd Mayweather Jr and the immensely popular Irishman Conor McGregor will face off in a boxing match. It would be just another fight, albeit a huge one, except that McGregor is not even a boxer. He holds the lightweight and welterweight titles in mixed martial arts (MMA), an emerging combat sport where striking and grappling with both hands and legs is allowed, both while standing and on the ground. The fact that this unprecedented cross-discipline match-up is even taking place means that at least some people believe that McGregor, with his speed and athleticism, has a shot at doing something that 49 professional boxers before him couldn’t accomplish. However, scientific evidence from the neuroscience of expertise, an emerging field investigating the brain functioning of experts, warns against betting on an MMA fighter, even a fighter as skilled as McGregor, upsetting a boxer in a boxing match.

Experts’ performances often leave us speechless, wondering how it is humanly possible to pull off such feats. This is particularly the case in sports, where seemingly impossible things happen. Consider the serve in tennis. Once the ball is in the air, the brain has time to process the ball trajectory and prepare an appropriate course of action, but by the time the body actually executes the required movements in response to these mental processes, the racquet will do no more than slice the air, as the ball will have already passed by. This is the paradox of fast reaction sports such as tennis or boxing: it is only when the ball or the punch is in the air that we can tell with certainty what is going to happen, but by then it is far too late to react in time, even for the quickest humans. The expert brain adapts to this problem by ‘reading’ the intention of the opponent. The positioning and movements of feet, knees, shoulders and the serving hand in tennis give away clues about the direction and power of a tennis serve. Similarly, the positioning of feet, hips and shoulders provide enough information for the boxing brain to anticipate a punch well in advance. The anticipation power of experts is also the reason why the very best practitioners look like characters from The Matrix, giving the impression of having all the time in the world in an environment where split-second responses decide who wins and who loses.

Being fast and having good reflexes in general is certainly helpful in rapidly changing environments like sports. However, no speed in this world will be enough if the brain hasn’t experienced and stored tens of thousands of movement patterns, which can then be reactivated and used for reading the situation at hand. This is best illustrated by another unofficial cross-discipline event fifty years ago between the legendary Muhammad Ali and Jim Brown, a National Football League (NFL) legend in his own right. 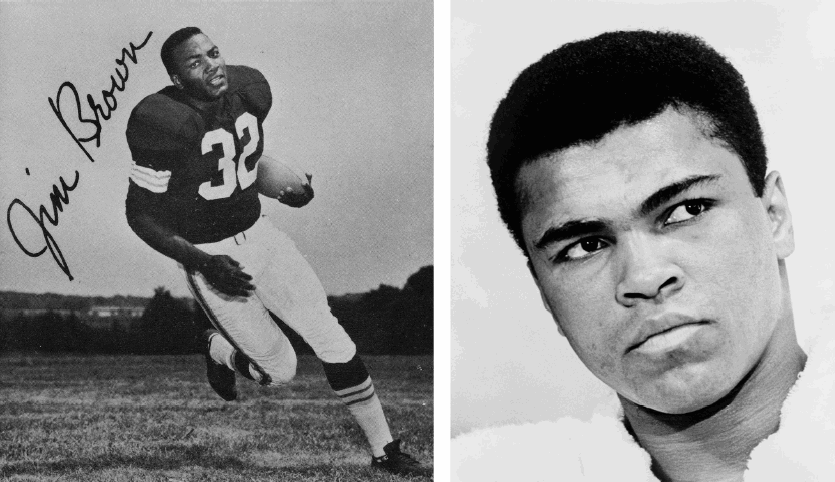 Jim Brown was a force of nature. He was incredibly quick, immensely powerful, and his extraordinary coordination and reflexes made him one of the greatest NFL players. In the mid 1960s, when he was only 30, Jim Brown was bored with the NFL and was pondering other ways of making a living. One of them was boxing, a sport where his immense quickness and sheer power would seem to be especially useful. He persuaded his manager to organize a meeting with Muhammad Ali, at that time the reigning champion at the peak of his power, who happened to be in London, where Jim Brown was shooting a film at that time. They met in Hyde Park, where Ali used to work out while preparing for the next bout. Ali tried to persuade Brown to give up on his dream of being a boxer. Brown maintained that he was as quick and as powerful as Ali, if not more so, and if boxing suited Ali, it should suit him too. What ensued then was a ‘sparring session’ where Ali asked Brown to hit him as hard as possible. The problem was that Ali was never to be found at the spot where he had been standing a moment earlier According to the legendary promoter Bob Arum, after about 30 seconds of swinging and missing by Brown, Ali pulled off one of his lightning quick one-two combinations and stopped Brown momentarily in his tracks. At that moment, Brown, visibly winded, had an epiphany and simply said: “OK, I get the point”.

Don’t expect McGregor to be embarrassed like Brown. After all, MMA includes aspects of boxing and McGregor has had experience with the sport, unlike Brown. Still, that experience is limited because boxing is just a part of the MMA skill set (not to mention embedded in a context where one needs to employ leg strikes and takedowns). One can be certain that McGregor’s brain has stored vastly fewer kinematic boxing patterns than the brain of a person who has boxed all their life, like Mayweather Jr. Mayweather Jr may be in his fifth decade, he may have ring rust after being absent for almost two years from the ring, and McGregor is not only younger but also possibly faster and stronger. Nevertheless, everything we know about the way experts’ brains work tells us that the smart money is on Mayweather Jr’s convincing win.

Find out more about the recently published The Neuroscience of Expertise (by Merim Bilalić) Part of the Cambridge Fundamentals of Neuroscience in Psychology series by Cambridge University Press.

Merim Bilalić is Professor of Cognitive Psychology at Northumbria University. is research on problem-solving biases in experts won the Award for the Outstanding Doctoral Research Contribution to Psychology from the British Psychological Society in 2008. ...

Neoliberalism in the Guise of...