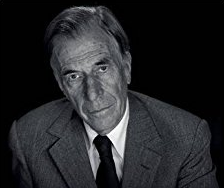 The Selected Letters of John Kenneth Galbraith includes numerous letters between the famed economist and some of the most influential politicians of our time.

Among those, of course, is President John F. Kennedy.

On the 100th anniversary of JFK’s birthday, read on for a letter from 1961 in which Galbraith advises the future President on his Inauguration speech.

Here is a further draft of the Inaugural, which incorporates the changes you suggested at Palm Beach and numerous others. I have had the help of Arthur and Walt Rostow, and the part on disarmament toward the end is based on a draft by Walt. Let me make and stress these points.

(1)         This is preeminently a speech for  those  who  will read  it  rather than those who will hear it. The immediate audience will not long remember. The readers will render the ultimate decision.  So,  rightly I believe, I have made few concessions to your speaking style.

(2)         I think, however, it is reasonably in character. My notion was to disavow pretentiousness but then maintain a reasonably even and elegant ﬂow of ideas. A few things – Walburgis, the age of plain speaking, the three-toed sloth –  are  there  as  attention  pieces.  (The newspapers will promptly do research on sloths and German mythology.)

(3)         I assume numerous further changes and amendments. Without pro- posing myself for added labor – my political life is ingloriously identiﬁed with a typewriter in a bathroom – I would happily take a hand in smoothing and  unifying  the  tone  of  the  ﬁnal  draft  if  you  wish.  The difference between a brilliant speech and a good one – at least of this sort – is what happens to it in the last half hour.

(4)         The substance reﬂects, I believe, your general mood. On Latin America I discovered that Ike had once proposed the policy of the “Good Partner.”  After consideration and some discussion with the experts  I have concluded that the right course is to build on the Roosevelt foundation, which is presently your major advantage. Here is the present form.

(5)         The conclusion I suppose must evoke God on some rising note.     My secular talents do not extend so far. And no man can write another’s prayers.

My best wishes. In case none gets used I will save a copy for 1964.

We must strive for efﬁciency on the New Frontier.

Richard P. F. Holt is a Professor of Economics at Southern Oregon University. He has authored and edited many books, two of which were named a Choice Outstanding Academic Title. He has also published more than sixty articles and book reviews in a variety of academic journals, and has served on various editorial boards. ...

An Introduction to Indigenous...