What is reality? – Why I’m Marching for Science on Earth Day

Why Fred Singer is Marching for Science on Earth Day

On April 22 we march across the globe to celebrate and affirm the reality of our senses, the truth of our observations, and the beauty of our complicated world.

Back in my formative college years, my friends and I would indulge in many spontaneous gatherings, in which the question of “What is reality” occupied the stage front and center.  As consummate dabblers in multiplistic world views, we considered all conceivable answers, and chose none.  But time shuffled on, and so did we, to new adventures in which the reality problem no longer seemed so central, nor so puzzling.  We recognized that reality is observable, but that your senses might betray you sometimes.  That seemed like enough.

Going back a bit before my formative college years, Copernicus upset this sensory world view by publishing (almost on his deathbed) “De Revolutionibus”, which proposed, and gave some evidence for the hypothesis that Earth revolved around a fixed sun (heliocentrism).  Originally this provocative alternative was mostly ignored, but many years later it raised some serious issues (particularly for Galileo) as it became more seriously considered. One major objection was that the reality imparted by our senses told us that the world was standing still – otherwise would we not be blown away by a world that was racing around a sun (and rotating at a frenzied pace to boot)? A second major objection was that the consensus of scientists at the time believed that that the world was standing still and occupied the central position.  A third major objection was that a heliocentric world view, if taken literally, seemed at odds with some parts of the Bible, in particular when Joshua asked the sun to stand still so the Israelites had more time to deal with the Gibeonites.

The reality of our senses is a powerful argument.

Copernicus, Galileo and scientists to follow would need to come up with a great deal of physical evidence to sway humanity from the commonsense observation that Earth is still.  They did so with astronomical observations (aided by the invention of the telescope) and by developing theories of inertia, momentum and gravity, which propelled our understanding of universal laws for many different applications.  As the scientific evidence became more compelling, scientific consensus shifted, and now most people accept the Sun as the center of the solar system, with Earth as one of eight (or nine) orbiting planets, even though these people (including many scientists) don’t understand the physics or the underlying mathematics. Lastly, even fundamentalist Christians and Jews can now argue that Joshua was simply using the language of his time when he issued his request to the Sun.

Advancing in time to 1896, Svante Arrhenius published a paper that proposed that atmospheric CO2 levels could influence atmospheric temperatures in ways that are now familiar to us.  Scientists were skeptical, but they tested his hypothesis and their imprecise instruments could detect no effect.  Like Copernicus before him, Arrhenius’ ideas were initially rejected by most scientists, until new technology was applied to measuring atmospheric CO2 levels, and to developing models of how the atmosphere and climate interacted.  Ultimately, these new approaches led to the development of a scientific consensus that climate is changing, that Earth’s surface is warming, and that human behavior is responsible.  Over the past 60 years we have measured the changes, we have developed a more coherent scientific understanding of atmospheric processes, we have made mathematical models that generate projections and we have validated these models empirically.  Unlike Copernicus and Galileo, we can observe climate change using the reality imparted by our senses (either online, in books, or by journeying to shorelines or to polar regions that are losing their cool). Unlike Copernicus and Galileo, the consensus of the scientific community is in our camp.  Unlike Copernicus and Galileo, the Bible does not make any claims about climate or CO2.

This reality should be a no-brainer!

But it isn’t, and I lack the omniscience to understand why this reality is being denied.  One hypothesis  is that the geocentric hypothesis has been replaced by the corporate-centric hypothesis, which states that corporations and their shareholders are at the center of the universe, and that financial earnings are the currency of reality.  The power of this system is that these earnings, if they are maximized and judiciously applied, can be used to purchase some people’s perceptions of reality, so that their reality denies the scientific consensus.  This new corporate-centric hypothesis denies scientific facts, and downgrades them with alternative facts that claim to be equally valid.

On April 22 we march across the globe to celebrate and affirm the reality of our senses, the truth of our observations, and the beauty of our complicated world.

We celebrate a universe with no center, and a world with millions of different species that interact with each other and their environment in meaningful and mysterious ways.

We celebrate the pursuit of rational inquiry into the processes underlying these interactions, and the deepening of our understanding of who we are as humans, and how we can, as scientists, apply real knowledge to allow our Earth to flourish. 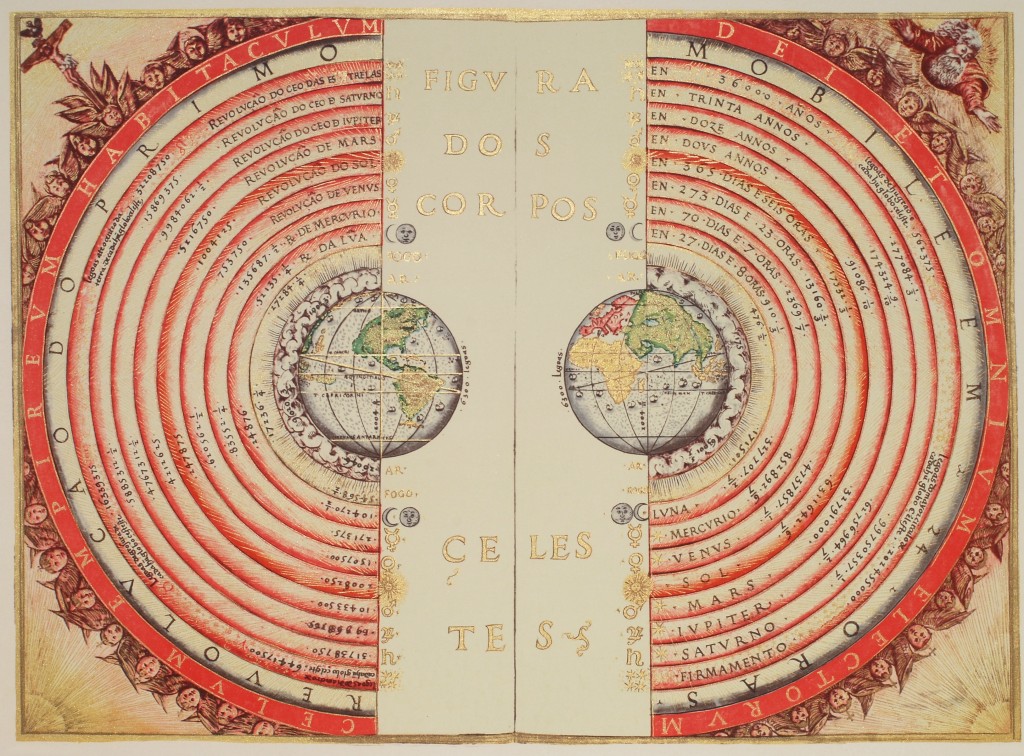 Figure of the heavenly bodies – An illustration of the Ptolemaic geocentric system by Portuguese cosmographer Bartolomeu Velho, 1568 (Bibliotheque Nationale, Paris)

About the Author: Fred D. Singer

Fred D. Singer is Professor Emeritus of Biology at Radford University, where he began teaching in 1989. A committed teacher, he developed research programs on the behavioral and community ecology of spiders, dragonflies and zebrafish, while also collaborating with several colleagues to promote active learning as part of an ongoing research program ...